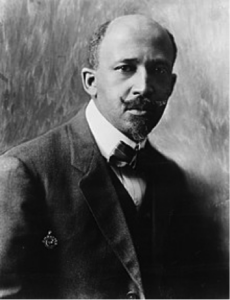 Reading Rufus Jones’s recent post discussing buying the home of James Weldon Johnson in Great Barrington, Massachusetts, reminded me of past research I had done on two other prominent African Americans with genealogical connections to that town. The first was the well-known historian and civil rights activist William Edward Burghardt [known as W.E.B.] Du Bois (1868-1963), who was born and raised in Great Barrington. I minored in African-American/African Studies in college (although I took enough courses for a double major had that been offered), and read several works by Du Bois. One of my college professors from Ghana had written a book on his country’s revolutionary leader Kwame Nkrumah, who invited Du Bois to Ghana in what ended up being the latter’s last few years of life writing the Encyclopedia Africana.[1] 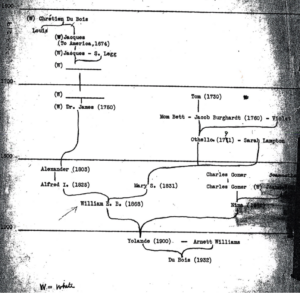 Du Bois described himself as having “a flood of Negro blood, a strain of French, a bit of Dutch, but thank God! No Anglo-Saxon.” The papers of W.E.B. Du Bois are at the Library of the University of Massachusetts, Amherst, and a microfilm edition is at the Boston Public Library and several other repositories. These papers show Du Bois had a serious interest in his own family history, with several documents he acquired on his ancestors in Massachusetts, Connecticut, and New York, and several handwritten and typed charts showing his ancestors and cousins, like the one at right. I used these papers to put together an ancestor table, going back to Du Bois’s great-great-grandfather Tom Etson/Burghardt, who was born in West Africa, enslaved by the Etson and then the Burghardt families of Kinderhook, New York, and later Great Barrington. Tom served in the Revolutionary War as a private under Captain John Spoor’s company of Colonel John Ashley’s Regiment of Berkshire County. Tom was manumitted for his service shortly before Massachusetts’ abolition of slavery in 1783.

When Michael Leclerc and I conceived the project of Western Massachusetts Families in 1790, we presented a day-long seminar at the University of Massachusetts–Amherst discussing the project and calling for submissions. We visited their library, appropriately named the W.E.B. Du Bois Library, where his original papers are kept. With the project being edited by Helen S. Ullmann, I wrote a sketch for the first volume (published in 2012), on Tom’s son, Jacob “Jack” [Burghardt], Du Bois’ great-grandfather, which also addressed the claim (on the chart above) by Du Bois that Jack’s second wife was Mum Bett – also known as Elizabeth Freeman) (ca. 1744-1829) – of Sheffield, Massachusetts, who had challenged her enslavement before the Massachusetts Supreme Court. Bett was owned by the same Col. John Ashley for whom Jack’s father served in the war. While no marriage record of Jack Burghardt and Mum Bett has been found and the latter was twenty years Jack’s senior, Jack may have married Mum Bett’s daughter Betsy Humphrey, whose first husband left the area and later emigrated to Liberia. 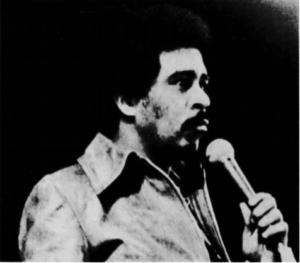 The second well-known African-American with ancestral ties to Great Barrington was the actor and comedian Richard Pryor (1940-2005). I had researched his ancestry shortly after his death, and after I posted his ancestor table online I received an e-mail of thanks from one of Pryor’s daughters. While Pryor’s immediate ancestry is in his native Illinois, one great-great-grandfather, Abner Martin Piper (1834-1906), was born in Great Barrington and moved to Illinois in the 1850s. Abner’s ancestry is similar to the Burghardt family, living between western Massachusetts and eastern New York state, and his maternal grandmother’s surname (Van Alstyne), likely indicates some of these ancestors were owned by Dutch families of the area. While I found no genealogical kinship between Du Bois and Pryor, in 1850, Great Barrington had a population of 3,264, with only 123 residents identified as people of color. I think it is very likely the Piper and Burghardt families knew each other.

[1] This project ended upon Du Bois’s death, but an inspired work was completed in 1999, edited by Kwame Anthony Appiah and Henry Louis Gates, Jr.