When I started researching family history more than twenty years ago, I was eager to find out about my great-grandfather Gerardo Smaldone, who emigrated from Italy to America. Where did he come from? When did he emigrate? Did other members of his family come too? I hoped immigration records would answer these questions. Unfortunately, before the twentieth century, passenger lists did not provide much information, but at least one could glean a passenger’s age, occupation, marital status, native country, destination, whether he or she was in transit or intending to stay in the U.S., what compartment they stayed in, and how much baggage accompanied them. Genealogists likely pay close attention to most of these details, but why care about baggage?! Amazingly, in Gerardo’s case, such trivial information was to prove decisive in determining when he immigrated to America.

In early May 2000, in response to my query to an Italian genealogy email group, someone sent me reference to a Gerardo Smaldone arriving from Naples at the Port of New York aboard SS Kronprinz Friedrich Wilhelm on 17 October 1894. The cited source was the multivolume series Italians to America, so I went to the Library of Congress in Washington, D.C. and found Gerardo’s listing in Volume 8. On a later research trip to the Family History Library in Salt Lake City, I found and copied the original passenger record from the microfilm. I thought I had found Gerardo’s immigration record (see illustration above).

Yet two tidbits of information about Gerardo in the passenger manifest puzzled me: he was married, and he had no baggage with him.

Yet two tidbits of information about Gerardo in the passenger manifest puzzled me: he was married, and he had no baggage with him. Of course I knew he had married sometime, but I didn’t know when or whether it was in Italy or New York. More curious was the absence of baggage, when almost everyone else on that passenger manifest page had one to three pieces. The fact that Gerardo had no baggage was intriguing, but at the time it seemed more engaging, even endearing. After all, we’ve all heard stories about impoverished immigrants who arrived in the U.S. with only the shirt on their backs! It looked like my Gerardo was one of them … literally! What a touching vignette for the family history, I thought.

But my folklore story-in-the-making began to unravel as research progressed. I eventually found that Gerardo’s wife-to-be, Rosa Tolve, arrived from Italy in 1891, they married in January 1892 in New York City, and by early 1894 they had the first two of their nine children. So 1894 could not have been the year of Gerardo’s immigration; rather, he was returning to New York from Italy after being away for an unknown period of time. This would explain why the 1894 arrival record shows him married and without luggage. I wondered if he went home because a parent, grandparent, or sibling was gravely ill or had died. However, years later, after completing research on his family in Italy, it was clear that none of these close relatives died around that time. 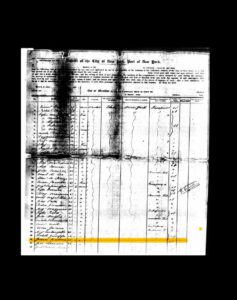 Realizing that Gerardo must have left Italy years earlier than I initially thought, I started searching for his immigration record again. I found it at the National Archives on microfilm. (Looking back, it was so tedious to do research in those days!) Gerardo arrived at the Port of New York from Naples on 27 May 1887 aboard SS Neustria with nearly 900 other mostly-immigrant passengers. He was 21, which was consistent with the only birthdate I had for him then, June 1865, as recorded in the 1900 census. (Subsequent research revealed that he was born in the small hilltop town of Potenza, Basilicata, on 30 January 1866.) Like everyone else on that manifest page, he was a “contad.,”[1] a native of Italy, and destined for New York. And on this voyage he did have baggage, as one would expect for someone moving from one continent to another! In fact, the faded manifest appears to show he came with 11 pieces! This seems like a lot of luggage for a farmer, but most of the other immigrants listed also had 10 or 11 items. He was indexed as Gerardo Smaltone; years later, even though Ancestry.com posted the digitized record listing him as masc[uline], his name was indexed as Gerarda, the feminine variant of Gerardo. In fairness, his name on the manifest does look like it ends in “a.” In any event, I could now date his immigration more confidently: 27 May 1887 (see illustration above right).

Just to be sure I had the right Gerardo, and to see if he might have traveled abroad again, I searched passenger lists on Ancestry, FamilySearch, MyHeritage, and Findmypast through 1912, when he died. I found several other men named Gerardo Smaldone or variants thereof, including some from Potenza, but none fit what is known about my great-grandfather. Admittedly, I cannot be certain that it was my Gerardo who arrived in New York in 1894. His age was given as 24, but my Gerardo was actually 28 at the time. Of course, ages recorded in passenger lists are often off by a few years, but there is no other information on the manifest to identify him uniquely.

Like most of the others listed on that page, he was a laborer and native of Italy, and New York was his destination. The only peculiarity was the lack of baggage. In this instance and context, that is not trivial information at all. Taking into account what is reliably known about my great-grandfather, and that I have not found any immigrant namesakes who better approximate his particulars, I think it is safe to say that he immigrated in 1887 and that he is likely the Gerardo who went back to Italy in 1894 for reasons unknown. Whatever the identity of this 1894 passenger, and whatever the purpose of his visit to Italy, my immigrant great-grandfather Gerardo Smaldone was among the first to transplant the name Smaldone in America.

Reflecting on the significance of baggage for this research effort, the moral of this story for genealogists is clear: no piece of evidence, however seemingly trivial or mundane, should be ignored!

[1] An abbreviation for contadino, i.e., a farmer.

17 thoughts on “No detail too small”