I don’t worry so much about the ones of my parents and grandparents, although in due course they will all pass into history. The multitude of photos of them, at each stage of their lives, here and in other family houses, argues for some chance that they will be recognized and remembered by future generations. 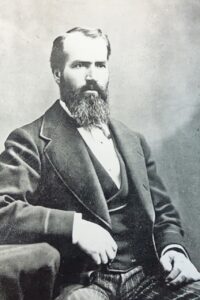 No, it is the collaterals and in-laws who give me pause, for who is likely to say, in 2060, “Oh, that’s Uncle Nathaniel Langford”? even if Uncle Nathaniel (1832-1911), successively husband of two of my great-great-great-aunts,[1] has his own Wikipedia page, where he is succinctly described as “an American explorer, businessman, bureaucrat, vigilante and historian.” Doesn’t the word “vigilante” leap off the page?! 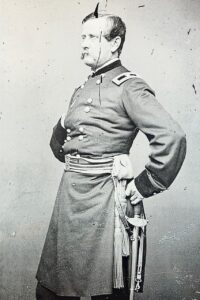 Another great-great-great-uncle, Brigadier General James Henry Van Alen,[2] came to a sad end, jumping or falling off the R.M.S. Umbria on a return trip from Europe. He had a sad life, in fact, as his wife – Mary Steward – died young, leaving one surviving son. James was bringing his three grandchildren back to the United States when he died, so one hopes that his death really was accidental.

Aunt Mary Van Alen’s brother, D. Jackson Steward,[3] is another great-great-great-uncle. It is interesting to see the Steward family look of 160 years ago, as the coloring shifted from ruddy and red-headed with my great-great-grandfather’s marriage to Catharine White[4]: my father, with his blue-black hair, is a good example of the Whites’ influence on later generations. 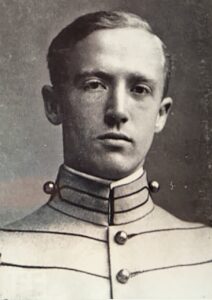 This last one should be easier to recognize, as the volume of images that survive for General George Smith Patton Jr. (1885-1945) dwarfs anything like that of the Langfords, Van Alens, Stewards, and Whites. General Patton’s life was bound up from his adolescence with the family of his future wife, Beatrice Ayer,[5] and my grandparents ended up as their neighbors, fittingly, as my grandmother was Mrs. Patton’s niece.

The Ayers, unlike the Stewards, tended to “flock together like birds on a telephone wire,” as one of my grandmother’s cousins used to say. I would suspect that several Ayer cousins’ houses boast many of the family photos in my collection, while the other families – distant enough, in all honesty; something like my fourth cousins – would be hard-pressed to identify my great-great-grandparents on the Steward side.

I guess all one can do is put the word out, and write what one knows on the backs of every image … in pencil, though!

[1] Nathaniel Pitt Langford was married to Emma Charlotte Wheaton 1876-82 and to Clara Wheaton in 1884. Emma and Clara’s sister, Cornelia Wheaton, was married to Frederick Ayer 1858-76.