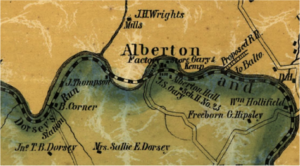 In genealogy, it is not unusual for individuals or families to simply disappear from all records without a trace. Entire towns falling off the map, however, is a far less common occurrence. Occupying nearly 3.8 million square miles, it is hardly surprising that a large portion of the United States is uninhabited, but over the course of the last four centuries there have been many communities that were once populated, only to be abandoned for any number of reasons. The people who lived in these communities often found themselves relocating to other towns, bringing the memories of their former home with them.

One problem that is often faced when researching an ancestor who lived in an abandoned community is the dearth of available records. This exact issue can be seen in the ruins of the town of Daniels, which was split between Howard and Baltimore Counties in Maryland. Some of the most pertinent records for genealogists, church records, town records and gravestones are virtually inaccessible to researchers of families in Daniels. The community that would become Daniels was first settled in the 1840s, when construction of a textile mill began along the Patapsco River.[1]

The town, originally known as Elysville, experienced a period of growth throughout its first decade, when housing was constructed for millworkers.[2] The town was renamed Alberton in 1853, after the Alberton Manufacturing Company, likely named for one of the many earlier owners of the property, Jacob Albert.[3] In 1940, this community, which, according to the Baltimore Sun, “seems to have wandered by mistake into the Twentieth Century,”[4] was wholly purchased by the C.R. Daniels Company of New York. The purchase included all of the land in the town, as well as all the mill housing.[5]

The community continued on for almost three decades under the ownership of the Daniels Company, until 1968, when the company informed all residents that the mill would be closing and all housing would be demolished within a few years.[6] The company’s decision to level all of the mill housing where the town’s residents lived was a controversial one. The company evidently refused to explain the decision, which appeared to be motivated by financial decisions alone. In the aftermath of the announcement, 150 or so of the town’s 279 residents left to seek work elsewhere, while the remaining 129 stayed in the town they had called home until they could no longer.[7]

Despite interest by museums, including the Smithsonian, which considered utilizing the town as a historic site, the town could not be saved from destruction.[8] Over the course of the next few years, nearly all of the town’s residents departed after being left without a home and in 1972, Tropical Storm Agnes destroyed the few remaining abandoned buildings.[9]

[How] would one even begin research in a town that does not exist on any modern map?

So, how would one even begin research in a town that does not exist on any modern map? Daniels serves as a fantastic blueprint for this challenging endeavor, as various factors have resulted in the loss of many record types upon which genealogical researchers often rely. A major factor in the absence of records from the town of Daniels was the fire that destroyed Saint Stanislaus Kostka Catholic Church after the building was struck by lightning in 1927. It is unlikely that any records from the church survived the fire.[10]

Today, more adventurous researchers can scale the ruins of the former church, including the overgrown and unmaintained cemetery where many residents were buried during the town’s heyday. Interestingly, none of the supposed burials dating from after the town was abandoned (and which are listed on FindAGrave) can be confirmed. The desertion of the town is evident from the gravestone of a James William Hickey, who was said to have died in 1969; although he shared a gravestone with his wife, his date of death was never recorded.[11] Just a half mile away are the ruins of another church, the Daniels Pentecostal Holiness Church, which was in operation until the town’s abandonment. The only church records from the town which are known to survive are from St. Alban’s Chapel, an Episcopal church, which are held in the Archdiocese of Baltimore’s Archives.[12]

Adding to the already challenging situation for researchers is the fact that neither Ancestry.com nor FamilySearch recognize Daniels, Alberton, or Elysville as distinct communities, likely because records there are sparse or, in many cases, non-existent. Without a town hall to contact, finding vital records that were recorded locally is rather unlikely. With that in mind, the question becomes: Where does one go from here?

As previously noted, two of the biggest names in genealogical records do not recognize Daniels in their search functions, and for this reason, locating census records for the former town requires a good deal of creativity and quite a bit of digging. A map of Howard County from 1860, available online through the Library of Congress, shows the names of several residents of Alberton; using these names,[13] the individuals mentioned can be pinpointed in the 1860 census. Doing so shows that census enumerators in 1860 recorded the area simply as District 2 and gave the post office name as Elysville, preventing the records from appearing under a normal search.[14] Because of this, results are often not produced when searching for Elysville in the census.

Additionally, given the often unclear status of the community (which was sometimes not regarded as its own town), later census records, including the 1900 census, do not contain any references to Alberton (as the town was then known). This problem is somewhat resolved by 1910 when an “Alberton Road” was recorded by the census enumerator, although this can only be found by conducting a keyword search.[15] Further complicating the search for census records is the fact that in 1920, Alberton was recorded as part of Baltimore County (instead of Howard County, where it had appeared before), as the community was considered a part of two different counties.[16] Simply put, census records are difficult to locate at best and utterly inaccessible at worst.

Local historical societies are often a great resource for information on the community level, owing to the fact that many people who lived within the community frequently donate records and other items to societies that are of great importance to researchers. In the case of Daniels, there is obviously no town historical society, as the town in question no longer exists. Therefore, the Howard County Historical Society is likely to be of the greatest help.

A search of the collection of the HCHS collections reveals that they hold military and marriage records for individuals who resided in Alberton.[17] Additionally, other repositories such as the Maryland State Archives and Maryland Historical Society contain vital records for Howard County, as well as land deeds, which may provide more insight into the families that resided in Daniels.

Newspapers are another resource which can be extremely helpful in finding information on residents from towns which no longer exist. A search for mentions of Elysville, Alberton, and Daniels in several newspaper databases – including Newspapers.com, GenealogyBank, and the ChroniclingAmerica Project from the Library of Congress – turns up several references to marriages and deaths of the town’s residents. For example, on 10 January 1874, an announcement of the marriage of George Washington Ruby and Miss Aria Walton Jett in Alberton was published in the Baltimore Sun.[18]

Additionally, one could also find the death announcement of James Sykes, a veteran of the War of 1812, who died in Alberton at the age of 94.[19] Several foreign language newspapers also make reference to Alberton on multiple occasions, including Der Deutsche Correspondent, a German-American newspaper which likely catered to immigrant mill workers.

Other Records of Note

According to the work “Mending a Fractured Landscape: Balancing Culture and Nature in the Vanishing Mill Town of Daniels, Maryland,” few records survive from the mills that operated in Daniels. However, a file on the C.R. Daniels Mill which likely contains important information about those who lived and worked in the town is held by the Maryland Historical Society.[20] Another, often under-utilized resource is ArchiveGrid, a database of archival resources across the United States. A search of ArchiveGrid reveals that the University of Wisconsin holds a collection titled “Textile Workers Union of America Records, 1915-1994.” This collection contains records for the C.R. Daniels Company in Daniels, another potential source of important information.[21]

While searching for information on individuals in a town that can no longer be found on any map might be a difficult task, there are certainly options for those willing to dig. Getting creative is a major part of in-depth genealogical research and, often, it can lead to the discovery of even bigger and more fascinating stories. The former town of Daniels, Maryland serves as proof of this fact.

[5] Nancy Q. Pickard, “Mending a Fractured Landscape: Balancing Culture and Nature in the Vanishing Mill Town of Daniels, Maryland,” May 2012, 27.

[10] Pickard, “Mending a Fractured Landscape: Balancing Culture and Nature in the Vanishing Mill Town of Daniels, Maryland,” May 2012, 49.

[20] Pickard, “Mending a Fractured Landscape: Balancing Culture and Nature in the Vanishing Mill Town of Daniels, Maryland,” May 2012, 29.