I love learning about the history of food. Just as genealogy does, learning about the evolution of food and food culture feeds my desire to fully understand how the people who came before us lived on a day-to-day basis. Recently, I did a deep dive into one particular food after my boyfriend and I got take-out pizza from Avenue Kitchen + Bar in Somerville, Massachusetts. We ordered one of their “Detroit-style” pizzas, which neither of us had ever heard of. We were absolutely blown away by how insanely delicious it was. This, of course, necessitated a whole deep dive into figuring out what exactly a Detroit-style pizza is. The descriptions we found online aligned with our own dining experience: thick-crusted, chewy, rectangular pizza, topped with cheese and pepperoni, drizzled with sauce, featuring crispy, crunchy edges. When I read that Detroit-style pizza could be traced back to one man, I was thoroughly intrigued, and immediately felt the need to set down my dinner plate and learn more.

The man we can thank for Detroit-style pizza is Gus Guerra. According to the State of Michigan’s tourism website, Gus, a bar and restaurant owner in Detroit in the 1940s, wanted to add something to his menu and “enlisted the help of his wife, Anna, who borrowed a dough recipe from her Sicilian mother. The Sicilian dough, topped with cheese and tomato sauce, would become the model for pizza in Detroit… The characteristics of the pizza – the soft and airy square crust, the crunchy exterior, the caramelized cheese that edges the pizza – are all due to the deep pans in which the pizzas are baked… Legend has it that Gus got his initial batch of pans from a friend who worked in a factory that used the pans for spare parts.”[1]

Agostino “Gus” Guerra was born on 9 October 1908 in Seravalle, the Republic of San Marino—a tiny European nation surrounded on all sides by Italy. On 8 March 1929, he sailed aboard the ship Augustus from Genoa and arrived 11 days later in New York. He was going to live with his cousin, Giuseppe Guerra, in Detroit. He was a laborer, and had either $25 or $70 in his possession (the passenger list shows 70 handwritten over the typed 25). Gus wasted no time declaring his intention to become an American citizen. One month later, on 18 April 1929, he completed a Declaration of Intention for naturalization.[2] He was naturalized in 1942.[3]

Gus did not start out in the industry where he ultimately succeeded.

Gus did not start out in the industry where he ultimately succeeded. After arriving in Detroit, he lived with his cousins on LeMay Street in Detroit for years, and worked a series of trade positions, including as a tile-setter for a contractor.[4] In October of 1940, shortly after his thirty-second birthday, he married Anna Passalacqua.[5] Four years later, he opened a bar called Buddy’s.[6] 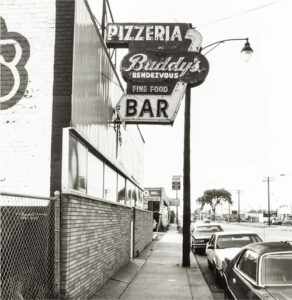 After two years of struggling to operate Buddy’s as a bar, he expanded and began to serve food, too.[7] This is when, rumor has it, he enlisted the help of his mother-in-law, Sicilian-born Celia (Genco) Passalacqua.

Celia, or Crocifissa, as she was born, came from Marsala, in the westernmost part of Sicily—a town known not for its pizza, but for its wine. She emigrated to the United States in 1911, bringing with her her three young children. Her husband, Gioacchino (Jack), was already living in Lawrence, Massachusetts. Shortly thereafter, the family moved to Detroit, where daughter Anna was born.[8]

Gus, Anna, and Celia’s dough recipe made their mark on Detroit’s restaurant scene. Once pizza was added to the menu at Buddy’s bar, business improved. In 1953, Gus sold Buddy’s and opened a new restaurant, Cloverleaf, in East Detroit, which he eventually passed to his children. Buddy’s continued to serve the pizza Gus and his family had developed.[9]

Cloverleaf is still around, serving up the same family recipe.[10] So is Buddy’s, the restaurant Gus sold in 1953, now a chain with sixteen locations throughout Michigan.[11] Though popular in Detroit since the beginning, this style of pizza was slow to move beyond its place of conception. Food writers note that it has only been in the past decade that Detroit-style pizza has made an appearance in the national food scene.[12] I, for one, am certainly glad that Detroit-style pizza has somehow made its way to the Boston area.

[1] “A History of Detroit-Style Pizza and Where to Find It,” https://www.michigan.org/article/trip-idea/history-of-detroit-style-pizza-where-to-find-it, accessed 23 October 2020.

16 thoughts on “A genealogy of a pizza”