Finishing up this series on places my family enjoyed during our socially distant summer, I move now from the North Shore to the South Shore, to “World’s End” in Hingham. This Trustees property was designed by the well-known landscape architect Frederick Law Olmsted in 1890 at the request of owner John Reed Brewer, with the intention of creating a 163 home residential subdivision. While the drives were cut, the development never came to fruition, and the land, consisting of four coastal drumlins extending into Hingham Harbor (with views of the Boston skyline), has been preserved as a setting for recreation since 1967, after the land was donated by John’s grandson, the poet [John] Wilmon Brewer (1895-1998).

John Reed Brewer (1818-1893) built a mansion here in 1856 and acquired most of the peninsula’s 400+ acres. John is buried at Mount Auburn Cemetery in Cambridge with his wife Caroline Francoeur Sayles (1821-1887), who was born at Wrentham, Massachusetts. Her middle name immediately captured my attention! Three years ago I wrote a post about the digitization of the parish records of the Archdiocese of Boston. In that post I discussed the couple John Francoeur and his wife Caroline (formerly Plimpton). John was born in France, while Caroline was of colonial New England ancestry. The Catholic records showed the baptism of their three daughters in Wrentham (where the couple lived), including the middle child “Mary Sebastian Franceour,” who was born in 1793 and baptized in 1797.

I had not researched this family any further after I wrote this post. The daughter Mary/Maria married Willard Sayles (1793-1847), and they were the parents of Mrs. Caroline Francoeur Sayles Brewer (and thus ancestors of the last owners of World’s End).

In my first post in the series, I mentioned the Rhode Island connections behind the Crane family, and continued that with the Appletons, showing both families had a descent from my ancestor Governor Roger Williams. In true genealogical serendipity, the first family I looked at behind the Brewer family of Hingham – Sayles – likewise can be traced back to the colonial governor! These three spots were a nice respite for my family during this very unique summer and the below chart shows that they (and I) all have a distant ancestral kinship! 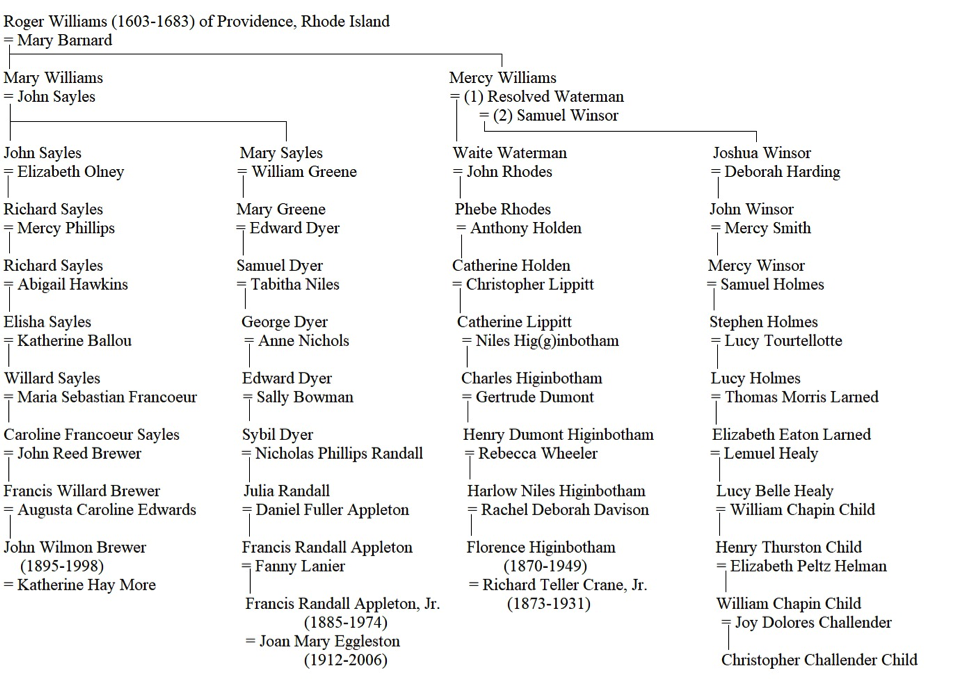 Sources for chart (in addition to those provided in the above mentioned posts):