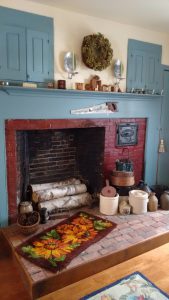 My cousin Asa Williams, the builder of Our Old House, came to Maine about the same time and from a nearby Massachusetts town as my great-great-great-great-grandfather George Read, with their wives (who were third cousins and stepsisters), settling at the Fort Western Settlement, the area’s trading post, bank, and social venue, the center of the tiny community’s daily life. Both were active in the community, Asa as a meeting house founder, tythingman, and the town’s sealer of leather, and George in local politics and education. Now I am on the Old Fort Western Boards of Trustees and Directors. The more I try to leave, the more I’m bound to stay. The farther away I travelled, the closer I got to home. Tell me my ancestors don’t influence my life! 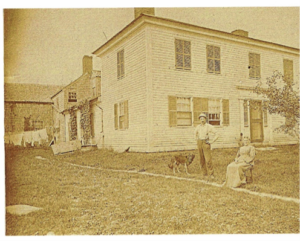 These two ancestors provided the foundation for generations of family to prosper here. Even the building of Our Old House is part of the convergence. Asa built initially a half-cape-style structure, but about 1820, the year of statehood, or shortly thereafter his son, Asa, added the front Federal-Style section, expanding the house by four rooms (with closets!) and a wide front hall. Asa Sr. died in July that year, living just long enough to see statehood. I’ve always thought that his son added the front rooms to provide for his mother and unmarried sisters pursuant to his father’s will.

Now that I understand that my family history has come full circle, I’m left with one unanswerable question:

Was any of it random?

[1] “Mummy, I think I might understand if only you wouldn’t explain.” ― Dorothy L. Sayers, The Wimsey Papers.

11 thoughts on “‘If only you wouldn’t explain’”