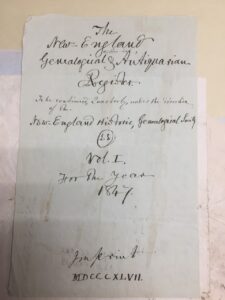 In January 1845, according to the proceedings, “a committee was appointed to prepare a circular for the use of the Society.” That November, the Society formed a committee to publish a journal “devoted to the printing of ancient documents, wills, genealogical sketches and Historical and antiquaria matter generally.” By January, the committee had arranged for bookseller Samuel G. Drake to finance the quarterly journal, including paying the $1,000 annual salary for Rev. William Cogswell, the first editor. With 700 subscribers, the first issue of the New England Historical and Genealogical Register came out in January 1847.

Early in 1858, when 60-year-old Drake presided over NEHGS, he wished to change the society’s name to reflect that of the Register. The Massachusetts Historical Society protested that the change would make their names too similar. Because Drake failed to follow the correct procedures, the name change could not be made. Instead, on 25 May 1858 (Thomas Prince’s birthday), Drake and members of NEHGS formed the separate Prince Society for Mutual Publication. The group’s intention was to publish rare original historical works (in competition with the Massachusetts Historical Society) with the guarantee that Prince Society members would purchase the copies.

The group’s intention was to publish rare original historical works … with the guarantee that Prince Society members would purchase the copies.

In 1865, the Prince Society published The Hutchinson Papers, producing its first official volume in the series, one entitled Wood’s New-England Prospect. The group continued publishing volumes nearly annually until 1911, and had released a total of 35 by the time the group dissolved in 1943.

At the turn of the century, in 1902, NEHGS began its efforts to publish Massachusetts vital records. Thanks to a donation of $56,500 from Robert Henry Eddy (the Eddy Town-Record Fund), NEHGS sought out vital records kept by towns throughout Massachusetts. The Society also decided to include other sources (like gravestones and church records) beyond the records held in the town clerk’s office. Henry Ernest Woods, editor of the Register, led the compilation and publishing efforts with assistance from female members. Multiple “tan cloth-covered volumes” came out every year, with the first batch including the towns of Alford, Hinsdale, Montgomery, Pelham, Peru, and Walpole.

As NEHGS approached its 130th anniversary, in 1974, the staff began a bi-annual News-Letter of the New England Historic Genealogical Society. Director James Bell wrote in the first issue that its purpose was “maintaining information communication” between staff and nationwide members by giving news of meetings, publications, and collections. The last issue was published in 1984.

In December 1983, Dr. Bell’s successor Ralph Crandall debuted a more informal bi-monthly newsletter meant to foster closer connections with individual members through queries, news of family reunions, and articles of interest. The preliminary issue advertised the naming contest, which resulted in the title NEXUS, standing for “New England Across the U.S.” This newsletter/newsmagazine ran until the end of 1999.

NEHGS also has a long history in publishing study projects.

In 1996, Brenton Simons (current President and CEO) initiated a special publications division geared towards producing and editing high-quality genealogies. Within the year, the Newbury Street Press already had 25 genealogies on the way to publication.

With the new millennium, in 2000, New England Ancestors magazine replaced NEXUS. According to Dr. Crandall’s introduction in the first issue, the magazine aimed to “cover both colonial families and more recent immigrants and settlers, and [to] introduce a host of new columns and features. We will also strive to keep you better informed of our services, programs, and important developments in the field.” In doing so, the magazine aimed “to be both enjoyable reading and helpful to your research.” With the broadened scope and switch to an online presence at AmericanAncestors.org, in 2010 the quarterly magazine’s title changed to American Ancestors.

Over the last decade, NEHGS has continued to expand its publication offerings. In 2013, the publications team began publishing the Portable Genealogist series so that researchers can bring how-to guides with them as they research. Two years later, in 2015, NEHGS took over editing and publishing the bi-annual Mayflower Descendant. This journal, begun by the Massachusetts Society of Mayflower Descendants, focuses on Pilgrim genealogy and history. During the year 2020, NEHGS plans to publish nine relevant works.

With 175 years of dedication to publishing, it is to be hoped that American Ancestors will continue to publish works in whatever format technology and readership allows for the next century and three-quarters.

2 thoughts on “A publishing timeline”