When I “hand-off” a genealogical manuscript, it can be some time before the work is handed back to me with queries from the copyeditor. Occasionally in that time, more resources may emerge (or become more accessible), and my own choices might have evolved with regard to ways of “ending” research where no solution was found.

While I will look at online trees for possibilities, and may put clues in brackets, my general practice is to remove them later on if I can find no supporting documentation. In a roundtable discussion when asked about this, Robert Charles Anderson said he would prefer to “commit the sin of omission versus the sin of commission.” Indeed, if you include a name itself within a genealogical summary of an article, even if you signal questions with “probably” or “possibly,” expect to see that person attached to the family in online trees soon thereafter, usually without any reference to your article or your caveats.

Still, there are occasions where the clue on the tree seems to make sense, and so I am reluctant omit the possibility. The above example was from research a few years ago that I had to revisit after a copyeditor’s query. This concerned the family of John Edward Lippitt (1833-1885) and his wife Athalia Brown (1837-1902) of Wilmington, North Carolina. John and Athalia had seven children, and while I had successfully “married off” two of them (and tracked another four who never married), their third child, Augusta Taylor Lippitt (born in 1863), was the one with whom I had hit a roadblock. I had found Augusta living unmarried in the 1900 census with her brother in Denver, Colorado. In 1902, Augusta’s mother died in New York City, and papers in Wilmington referred to Augusta as still living in Denver. This was the last record I could find of Augusta.

An online tree had said she married “D.J. Tirsway” in September 1903. I researched Mr. Tirsway, who I soon learned was Dennis J. Tirsway, and while I found him in several city directories in Denver (but not listing a wife), I could not find him in the 1910 or 1920 census, and by 1930 (then living in Evergreen, Colorado), he was widowed. Dennis J. Tirsway (1860-1955) was born in Nevada, according to the 1900, 1930, and 1940 censuses (with parents born in Denmark, per 1900 and 1930). To make matters more confusing, in the 1910 census there was a Dennis Tirsway with wife Minerva, living in Sheridan, Wyoming, but this (at first) appeared to be a different Dennis, as his birthplace was listed as Scotland.[1]

I had left Augusta’s possible marriage out of the manuscript but had forgotten to remove the query in the footnote. Thankfully, the copyeditor noticed this. While I could have just removed the reference to the marriage I had been unsuccessful in validating, I decided to take another look. I did a Google search of “Tirsway” and “Lippitt,” which I’m sure I had done previously, but this time I found a monograph entitled Descendants of Duncan & Ann (Cameron) MacRae of Scotland and North Carolina, which is also in our own collection. This genealogy related to the family through Augusta’s grandmother (Amelia [MacRae] Brown) and, given the common surnames, it is not something I would have been led to normally. It appears to be the source of the various undocumented trees, as the marriage is just given as a month and year without a place, and Augusta’s husband is “D.J. Tirsway,” just as he had been in the trees. 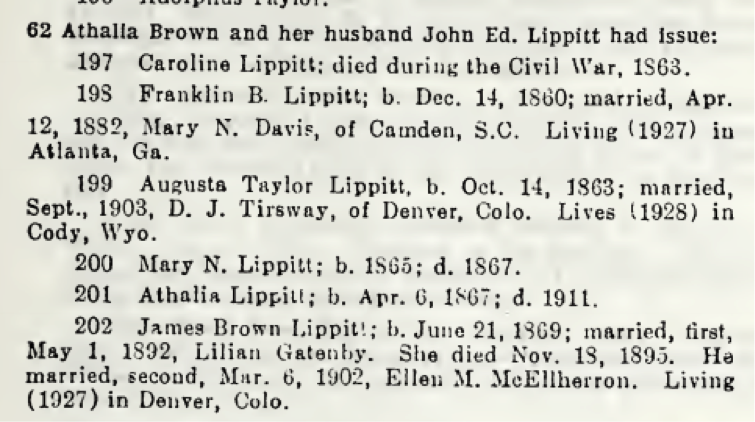 Given that this work refers to Augusta as living in Cody, Wyoming in 1928, the year before it was printed, it would appear the author was in touch directly with Augusta or a near relative.

I now knew that Augusta was likely alive in 1928. However as stated above, Dennis was a widower in the 1930 census. With this new information, I searched Wyoming Death records, 1909-1969 (available on Ancestry.com, and only released earlier this year), to find “Augustus Tirsway” dying at none other than Cody, Wyoming, on 14 March 1929, aged 65, fitting perfectly with the age of our Augusta Lippitt, who was born 14 October 1863!

I’m grateful when copyeditors prompt a fresh look at research that was done over some time, and also for the opportunity to add additional references that were not readily available before: in this case, the process led to finding better records to confirm an unsourced clue.

[1] This 1910 entry turned out to be the same Dennis Tirsway, and “Minerva” was our Augusta, but whoever took this information got several facts wrong in addition to Dennis’s birthplace and Augusta’s name. They are also with Dennis’s son Harry by an earlier marriage, who had been with Dennis in the 1900 census when the latter was widowed before remarrying. This 1910 entry says Dennis and “Minerva” have been married twenty years (instead of six) and gives her birthplace as Ohio instead of North Carolina.

12 thoughts on “Omission vs. commission”