One of the features of this anniversary year – the four hundredth since the Mayflower’s landing at Plymouth as well as the 175th anniversary of the Society’s founding in 1845 – has been a focus on early members of the Society, people no one alive today can have known. As a historical society, we are familiar with old records, even ones biographical in nature, but there is still something uncanny about how some early members – even some of the Society’s founders – come to life in the stories of their own time.

I am thinking of the Rev. Lucius Robinson Paige (1802-1896), a tireless recorder of Massachusetts local histories.[1] His approach to historical research is one we venerate today; that is was worthy of comment says something important about the histories published earlier in the nineteenth century:

[Paige] never gave his readers anything for fact which he got by inference, or hearsay, or by a guess. For this reason his work in the historical field is of permanent value. . . . The founders of Cambridge and Hardwick were to him like the living men whom he met in his daily walks. His books are valuable to us, not only because of the thoroughness of research which distinguishes them, but because they set the past before us as it really was.[2] 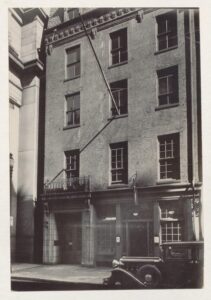 More than a generation after Paige was elected, and just two years after his death, the first women were elected to membership in the Society. Speaking at the twenty-fifth anniversary of that historic election, Lucy Hall Greenlaw – chosen to represent the first class of women members (and just within living memory) – noted that “the admission of women to the ranks of this Society was not a step toward that objective known as ‘women’s rights,’ but a real, purposeful act to enable us to follow closely suggestions received and clues discovered, by stepping behind those ropes which barred us from the alcoves and the much desired books and scanning quickly the pages whereupon we found our reward for patient searching.”[3] 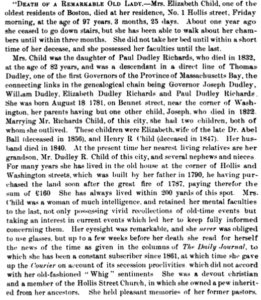 In May, Chris Child wrote about a nineteenth-century kinswoman who never had the chance to become a member of the Society; she died in 1878. But Elizabeth Richards Child (b. 1781) was a generous donor of “books and tracts” in the years immediately following the Society’s founding, and she was also a longtime subscriber to The New England Historical and Genealogical Register.[4]

The last survivor of the Society’s five founders died in 1889. William Henry Montague was a Boston merchant in the 1840s; later, when he fell on hard times, his friend William Trask noted that he was possessed “of a remarkable memory[;] he could point out, often, even during his years of blindness, the way and the where to obtain the right information on many given [historical] subjects.”[5]

While it always tempting to ascribe outsized characteristics to those who have gone before us, these predecessors – energetic, often long-lived, devoted to building a new organization – come down to us with undimmed luster.

[1] He is recorded as the first elected member of the New England Historic Genealogical Society, on 21 January 1845.