Several years ago, long before the online catalogue, I spent time going through the NEHGS card catalogue looking for materials related to my Richardson ancestors. I came across the card for a manuscript compiled by William S. Richardson. As it turned out, he was related: he’s my second cousin four times removed. We descend from William Richardson of Newbury, Massachusetts, through his great-grandson, Parker Richardson, Sr.

William S. Richardson’s contribution was greater than the donation of a manuscript. He was an active member of the Society who joined in November 1906 and became a life member in 1911. He served on the Council and several committees until his death on 6 October 1923. He served on the Committee on Ways and Means, the Committee on Finance, and was a member and secretary of the Committee on Heraldry. He was an inventor and entrepreneur; in addition to acting in amateur theater productions, he wrote plays, poetry, and newspaper stories. The pursuit of family history was another of his passions. I learned a great many details of his life from the memorial published in the Register following his death. 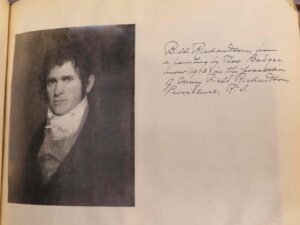 William tracked down and included photostatic copies of three Revolutionary War era letters written by two of his maternal ancestors.

Benjamin Badger, William’s great-grandfather, was the author of two of the above-mentioned letters. One was written 25 October 1776 from the military encampment on Mount Independence on Lake Champlain. In it he describes his fellow soldiers as looking “as if they come from the quick silver mines creeping about with thin lanthorn jaws.” Phebe Emerson, his mother-in-law, wrote the third letter to a friend in November 1776. In it she gives readers a sense of what it was like on the home front in Reading “since Concord fight.” In the early 1910s the letters were in the hands of family members in Indiana and Rhode Island, respectively. I wish I knew their locations now.

William Streeter Richardson’s enthusiasm for the work of the Committee on Heraldry, on which he served from 1913 until his death in 1923, shows clearly in his manuscript. Interspersed with the genealogical records are illuminated coats of arms for several of the families. I descend from only one of the families so graced, the Herrick family. William Streeter Richardson’s ancestral families of his maternal line include Bulkeley, Holland, and de Lacy, to name just a few.

I often wonder who else has discovered the wonderful things that this manuscript holds.

17 thoughts on “A family treasure”