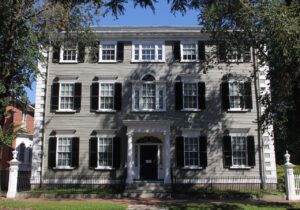 This is usually the time of year that many house museums open for the season. While the museums are closed this year due to the coronavirus, I thought I would look back at some of my favorites. One that stands out is the Phillips House, a beautiful Federal-style mansion set in the McIntire Historic District of Salem, Massachusetts.

In 1806, Elizabeth Derby West, eldest daughter of Elias Hasket Derby, sued her husband, Nathaniel West, for divorce on the grounds of adultery. The Rev. William Bentley attended the trial and wrote about it in his diary.[1] Bentley did not hold back his dislike for Mrs. West, describing her as, “… all that is execrable in women from vanity, caprice, folly, & malignity & after every quarrel with all her relatives she waged open war against her husband…”[2] Much to his consternation, the court found in favor of Mrs. West. The parties agreed that she would receive the mansion that she and Nathaniel had built in Danvers.[3]

Elizabeth wanted to be sure that Nathaniel never owned the Danvers home again, so she left it to her three daughters in her will. Elizabeth died in 1814. In a twist that Elizabeth did not anticipate, her youngest daughter Sarah, now owner of one-third of the estate, was unmarried when she died in 1819. Nathaniel inherited Sarah’s one-third portion of the Danvers home. He literally took his share of that house – the equivalent of 4 rooms – and moved it by oxen teams and logs to the house he was building on Chestnut Street in Salem. Those rooms now make up the front 4 rooms of the Phillips House.

An extensive renovation in the early 1900s…

Over the years, the house changed hands and underwent various renovations. The last extensive renovation was undertaken by Anna and Stephen Willard Phillips in 1911. They renovated the house in the Colonial Revival style and installed the newest technology at the time – electricity, a heating system, indoor plumbing, and telephones.

When Anna and Stephen moved into their newly renovated Chestnut Street home in 1912, they brought with them beautiful artwork and an extensive collection of items from their world travels. Stephen was a wealthy finance and investment attorney who had the good fortune not to lose money in the stock market crash of 1929. He and Anna had one son, Stevie.

The furnishings in the house are original to the family and to a large extent have been placed in their original position in the house according to family photographs. The Phillips family was in the habit of keeping things. Consequently, there are extensive amounts of family documents such as letters and accounts that give a wonderful window into their lives. One special letter on display is little Stevie’s letter to Santa Claus that he wrote in 1914. He received everything on his list that year, including the pony cart on display in the carriage house.

The family entertained three to four nights per week. They kept notes on each dinner party, including who attended, where they sat, what was on the menu, and even topics of conversation. When I toured the house, the table was set for a particular dinner party held on 30 July 1919. The dishes, silverware, and glasses corresponded to the people who attended, where they sat and what was on the menu.

…and a glimpse into upper-class life of the period

Moving from the public rooms on the first floor to the family’s private rooms upstairs and then to the staff quarters on the third floor is a stark example of the upstairs-downstairs nature of upper-class life in the early 1900s. The household staff consisted of five people – three who lived in the house and two who lived off-site with their families. Following the steep back staircase down two flights of stairs is the kitchen which has been kept mostly in its original state.

The tour continues in the carriage house filled with antique carriages, vintage cars, a sleigh, and Stevie’s pony cart. All of these belonged to the Phillips family. Anna Phillips’ mother’s carriage was the height of style in the late 1800s with its gas lamps and leather seats. The automobiles on display include the family’s 1936 Pierce-Arrow limousine and their 1924 Pierce-Arrow day-to-day touring car, complete with a mechanic’s box on each side for the chauffer to use in the event of car trouble. There is also a 1929 Model A Ford purchased in the 1950s to use at the family’s summer home.

Anna Phillips died of stomach cancer on Halloween night in 1938. Her husband Stephen died in 1955. The domestic staff continued to live in the house after his death. When their son Stevie died in 1971, he wanted his childhood home to become a historic house museum. His wife Betty formed the Stephen Phillips Memorial Charitable Trust for Historic Preservation and opened the house as a museum exhibiting the Phillips family furnishings, art, and antiques. The house was acquired by Historic New England from the Trust in 2006.