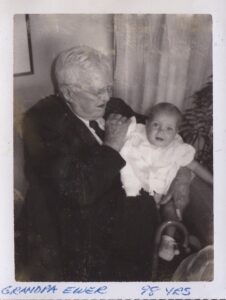 Recently Meaghan E. H. Siekman shared tips for how to incorporate genealogy into at-home learning, noting that going through old photographs is a good way of introducing children to relatives who passed away before they were born.

That reminded me of a mystery in my own album of early childhood photos. It’s a picture of me taken on my very first Easter, sitting on the lap of an elderly man, and labeled: “Grandpa Ewer 98 Yrs.” Even as a very young girl, I was perplexed by this picture because I knew both of my grandfathers, and two of my great-grandfathers, and none of them had the name Ewer. When I asked my mother who this “Grandpa Ewer” was, she replied that he wasn’t really related to me. Who was he, then, and Why was he in my photo album? It was only when I started doing my own genealogical research that I found out.

On 1 May 1942, my paternal grandfather’s best friend, Armand Herb, was flying aboard United Airlines Flight 4 from San Francisco to New York City. As his plane prepared to make a night-time landing at Salt Lake City, the pilot mistook their location and crashed into Ensign Peak, killing everyone aboard. My grandparents continued their friendship with Armand’s widow, and celebrated with her when she married Dr. Edward Goldsmith Ewer[1] a decade later. His first wife and youngest daughter had just died the previous year, after inhaling metallic spray paint while making Christmas decorations … a tragedy that spawned cautionary tales in my childhood, though the victims were unknown to me.

Eventually my father’s sister married Armand Herb’s son (and Dr. Edward G. Ewer’s step-son), and so the two families became one. By extension the Ewers became part of my family, though I never saw them after my infancy. “Grandpa Ewer” was Dr. Edward G. Ewer’s father, and my cousins’ step-great-grandfather, Dr. Edward Norton Ewer (1866-1965), and we were all guests at Easter dinner those many years ago. Mystery solved! 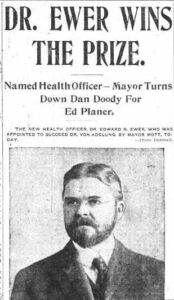 As it happens, I’ve been thinking a lot recently about Dr. Edward N. Ewer. Stories of valiant doctors, nurses, and other health professionals have been much in the news, and his story fits right in. On 10 May 1905, the Oakland Tribune ran a short story with photograph titled, “Dr. Ewer Wins the Prize,” announcing that the mayor had just appointed him Oakland’s Health Officer. Less than a year later, the San Francisco Earthquake set the entire Bay Area on its head, and it was Dr. Ewer’s job to respond to the crisis, which included isolating twenty cases of smallpox plus responding to any number of sanitary emergencies. Some prize indeed!

[1] I found out through their high school yearbook that my grandfather and Ed Ewer were high school classmates, something unknown to any living family members.