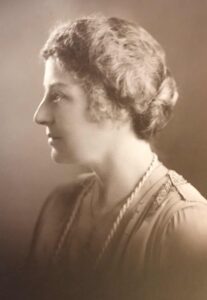 What is it that they say about coincidences, that there are no coincidences? The word is defined as suggesting a remarkable concurrence of circumstances that seem to have “no apparent causal connection.” The OED shows a 1598 usage meaning “exactly contemporaneous” and a 1656 usage meaning “occupying the same place.” It seems that, in reality, coincidences are less magical than they initially appear to be when one considers the probability of two events occurring.

I thought about coincidences recently when taking The Weekly Genealogist survey that asked about personal connections to NEHGS. Had the question been asked just a few days earlier I would still have been able to check a number of the boxes, but the coincidence of it appearing when it did allowed me to check the last box, the one about a connection to NEHGS not mentioned in the survey. It turns out that I had just made a discovery – really a couple of discoveries – that brought a smile to my face, discoveries of the sort that make us aware of physical and spiritual connections to the past, and also that who we are, at least in some tiny measure, may be deeply imbedded in our DNA.

Working on my paternal great-grandmother’s tree where I’ve been a little stuck on her maternal Stewart and Low lines, I’ve been able to gather a number of newspaper stories about the informal talks she often presented to members of the Massachusetts State Federation of Women’s Clubs. She also contributed charming historical anecdotes to her hometown Winthrop newspaper and a few of those, too, have popped up online. Her hobbies included painting china plates, a fashionable Victorian era hobby, and dabbling in family genealogy. She was rightfully proud of her Revolutionary War ancestor, Lieut. James Puffer, through whom she joined the Daughters of the American Revolution in 1920, after which family members took to calling her Sadie Puffer. She apparently delighted in the teasing.

She apparently delighted in the teasing.

I never personally knew my great-grandmother, Sarah Edna “Sadie” Lee Whorf (1871-1962), though I have a gauzy memory of standing with my father by her bedside in the nursing home in Winthrop where she spent the last year or two of a long life, well lived though not without heartbreak. Most of what I know about her comes from my Dad who adored and admired her, and who spent more time with her than did most family members. It seems that throughout childhood, whenever he became a little too rambunctious for his parents (who had had four children in six years), he was sent from Brookline, and later Provincetown, for extended stays to his grandmother’s house in Winthrop. Come summer he eagerly anticipated her arrival at my great-grandparents’ summer house in Provincetown, relishing time with her on the beach, in the flower garden, and in the attic. 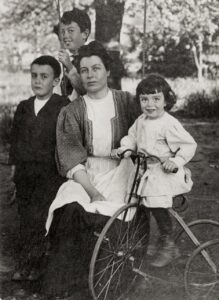 She was a physically beautiful woman, my Dad always said, but more attractive was her inner light, her sense of humor, and her remarkable ability to give her grandchildren what they needed individually. She had done the same for her three sons, one who became a painter (my grandfather), another a Broadway actor and Hollywood director, and the third a linguist. My Dad often said that his childhood visits “up north” never seemed like any kind of punishment but, rather, a special holiday arranged just for him. At the end of his life, one of his lasting regrets was that he hadn’t visited his grandmother more often. Because he didn’t drive and was always dependent on others for a ride, his trips from the South Shore, where we lived, to the North Shore were infrequent. We tend to forget, in this day and age of being able to flit from coast to coast in five hours, that getting to Winthrop in the 1950s and 1960s was something of a chore. Without one’s own ride it required a precisely coordinated schedule of buses and subways as well as a taxi ride or two.

My great-grandfather, Harry Church Whorf, was, by profession, a graphic designer though never without an artistic side endeavor of some sort. He died far too young, at only sixty years of age, leaving behind numerous unfinished projects including a memoir, a geological survey of Boston Harbor, and a vast collection of lantern-slides that he hand-colored with the principles employed by modern “sunlight painters.” Around these glass slides Sadie had woven the talks she presented to the women’s clubs and various other societies. One 1925 brochure advertising her Land of Color – Cape Cod As the Artists See It program noted that “Mrs. Whorf’s accompanying discourse is full of color in a literary sense, with its chatty bits of Bohemian gossip, its touches of local history, geology and nature lore, and its all pervading flavor of the sea. Without being technical or tedious, it is replete with art information in a popularly assimilable form.”

“Mrs. Whorf’s accompanying discourse is full of color in a literary sense, with its chatty bits of Bohemian gossip, its touches of local history, geology and nature lore, and its all pervading flavor of the sea.”

I discovered that on at least two occasions Sadie traveled to the New England Historic Genealogical Society (then in Ashburton Place) to speak to members. In May 1930, she presented a talk, Romance and Reality in Boston Harbor, during which she offered that the “first cultivated apples in New England were from an orchard on Governor’s Island [now part of Logan Airport], Boston Harbor, started by Gov. John Winthrop 298 years ago this year, and after the orchard had been inherited by his son Adam Winthrop, the products of the orchard were known as Adam’s apples.” 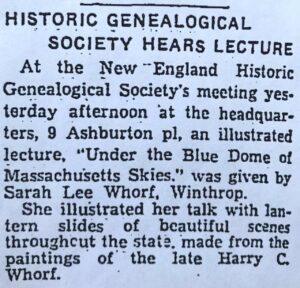 In October 1936, Sadie made a return visit to NEHGS to deliver an illustrated lecture, Under the Blue Dome of Massachusetts Skies, that delighted the audience with scenes from throughout the state.

It seems that Sadie was not the only member of the family to be welcomed by NEHGS. On the heels of Sadie’s 1930 talk her son, linguist Benjamin Lee Whorf (my great-uncle), offered a more scholarly address in October 1931. Also accompanied by Harry’s lantern-slides, the talk, Ancient Civilizations of America, merited a short notice in the Boston Globe where, it was noted, Ben spoke of details in Mayan architecture that were then being introduced into American architecture, including skyscrapers. That notice led me to a much fuller account of the NEHGS meeting in the Register. Trust me when I say that the NEHGS members who heard the talk must have been a remarkably sturdy and intrepid group to sit through it.[1]

As delighted as I was to learn of these family connections, there was yet another NEHGS link. During the recent Seventeenth-Century English Research seminar at NEHGS, I was staying focused on the speaker until, in a momentary lapse, my eye caught the description of a tall case clock against the wall in the rotunda. Certain that my brain had registered a familiar name, I stole another glance and saw that the Simon Willard clock of inlaid mahogany and white pine had belonged to a John Whorf.

…I stole another glance and saw that the Simon Willard clock of inlaid mahogany and white pine had belonged to a John Whorf.

During a break in the presentations, I leaned in for a closer look and, indeed, the clock, dated ca. 1817, had once belonged to my great-great-great-great-grandfather, John Whorf (1785-1854), who lived in Provincetown. It was bequeathed to NEHGS by Philip A. Whorf (1841-1916), the last of Provincetown’s “Old Guard” Grand Banks salt cod fleet owners and outfitters. His grandfather, Thomas Rider Whorf, was John Whorf’s younger brother, which is perhaps how the clock came to be in Philip’s possession. The clock has its own interesting history. After being accessioned by NEHGS sometime after Whorf’s death, it was sold in 1982, only to be reacquired at auction in 2017, thanks to the generosity of an anonymous donor.

Was it a remarkable coincidence that I had found these family ties at the same time The Weekly Genealogist was asking its question? Probably not, when one considers all the questions that have been asked over the months and the probability that any particular question might intersect with a current project. “Coincidences” probably happen all the time, though we don’t always notice or give much thought to their meaning. They seem, indeed, to be the inevitability of genealogy, where so many apparently random things do eventually come together.