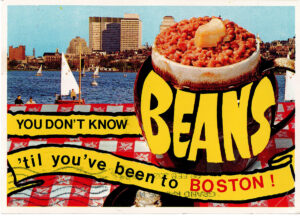 Last month my sons Oliver and Charlie each received a postcard from their grandparents—Grandpa Bill and Oma—in Michigan. My husband Tom and I were slightly mystified because the postcards were from Boston and Cambridge and had seemingly traveled through time from the past. The Boston skyline didn’t look quite right. And who talks about beans anymore? Even the style of the fonts and the graphic design are extinct.

Oliver’s postcard featured this time-capsule description of our city: “Boston, founded in 1630, has become famous for fine foods, one of which is Boston baked beans. However, residents of Beacon Hill (pictured on this card) would rather be known for exceptionally succulent seafoods and robust yankee [sic] cooking which brings out the natural hearty flavor of meat rather than disguise it with spices and seasonings.” 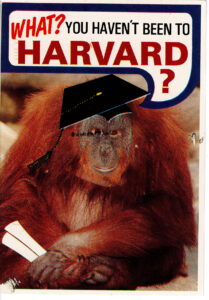 Charlie’s postcard was more succinct in its depiction of Cambridge: “A City of Colleges.”

It all became clear as we read the message on Oliver’s postcard. “We got these cards a long time ago when we first visited Boston in 1982,” wrote Grandpa Bill. I was absolutely tickled by these postcards—purchased before Tom and I were born, and then mailed to our children, in Boston, their birthplace and our home. I had to know more.

Grandpa Bill and Oma—or Bill and Truus, as I know them—were in Boston back in 1982 for business. They lived in Chicago at the time, and Bill was job hunting. He had an interview in Providence, Rhode Island. They flew into Boston for some sightseeing and took the train into Providence for the interview. (It wasn’t Truus’s first time in Boston. As a tourist from the Netherlands, she had visited previously with her sister in 1974.) 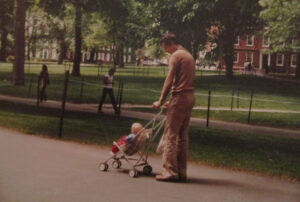 During that trip in 1982, Bill and Truus visited Beacon Hill and Back Bay. They went up the Hancock Tower, explored Harvard University, and purchased postcards—all with their baby Michael, their only son at the time. Boston wooed both of them. “We would have loved to move there,” says Truus. But they didn’t. (They lived in the Chicago area until 1986, when they moved to southwest Michigan. They still live there today.)

As we know, their relationship with Boston did not end after that one lovely trip. In 1983, Bill and Truus’s son Tom was born. And in 2005, I entered the story when Tom and I met at Andrews University in Berrien Springs, Michigan. We married in 2008 and made our home in Boston. Bill did not get that job in Providence but he ultimately views it as a positive: “As things turned out, it’s probably better now that I didn’t … we would have moved there and Tom would not have attended Andrews…”

How fascinating that two postcards could serve as a snapshot in time of a young couple’s life and the decisions they faced. And how wonderful that Bill and Truus get to visit Boston over and over to see their grandchildren!

5 thoughts on “Postcards from the past”