Boston has been a hub of learning since its founding. Today, genealogists have several major repositories where we can access huge collections. With NEHGS celebrating its 175th birthday, a nearby sister institution also has a significant anniversary in 2020. The Boston Public Library (BPL) was established just three years after NEHGS and has since held two big openings during the month of March.

Considered the first large public library in the U.S., Boston Public Library initially opened its doors on 20 March 1854. At the time, the lending library was located in a converted school on Mason Street (near Boston Common). Last year, BPL celebrated the 165th anniversary of having its own building.

The original quarters lasted less than four years because the collection almost immediately outgrew the accommodations. In January 1858, BPL made the move to Boylston Street. It took about twenty years for the collection to fill that space.

No lackeys cringe, no courtiers wait,/This palace is the people’s own!

In 1880, the City of Boston granted BPL land further down Boylston, at the intersection with Dartmouth Street across from Copley Square. Towards the end of the decade, on 28 November 1888, the cornerstone was laid. The elder Oliver Wendell Holmes recited a poem he had written for the occasion. The most-remembered stanzas remain:

Let in the light! These windowed walls

Shall brook no shadowing colonnades,

But day shall trod the silent halls

Behind the ever-open gate

No pikes shall fence a crumbling throne

No lackeys cringe, no courtiers wait, –

This palace is the people’s own![1]

It took more than six years to construct the building at 700 Boylston Street as designed by architect Charles Follen McKim. BPL’s current Central Library opened to the public 11 March 1895. That evening, the Boston Globe described the event.

Boston threw open the portals of her temple of knowledge for the first time at 9 o’clock this morning, and a thirsty multitude rushed eagerly into the magnificent building. The fount of education was quickly tapped, and in a shorter space than it took Luna to hide her face last night, books of every description were being scattered throughout the city from the great repository in Copley sq.[2] 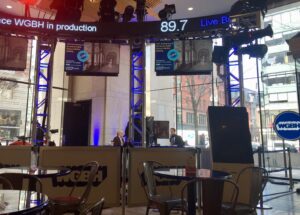 On the 125th anniversary of this grand opening, WGBH Studio held a delightful discussion with BPL president David Leonard and Gianfranco Pocobene, chief paintings and research conservator at the Isabella Stewart Gardner Museum. The topics they tackled included recognition of the centennial anniversaries of artist John Singer Sargent’s mural cycle “Triumph of Religion.” Sargent began the work that would adorn the third floor in 1890 (130 years ago). The library installed the murals until 1919 (101 years ago), but Sargent left the final panel unfinished when he died in 1925 (95 years ago).

Both Leonard and Pocobene emphasized that the library’s architecture served as a model for similar institutions that came after. However, as president, Leonard explained that celebrating the building’s history really was intended to educate about the vast collections and services currently offered at the Central Library. After all, BPL still stands as the third-largest public library in the nation (after the Library of Congress and New York Public Library). Leonard gave the official statement:

We are dedicated to preserving and upholding all that the McKim Building has represented throughout its 125-year history — the grandeur of its architecture and art alongside the promise of the free resources and opportunities it provides to all. This “palace for the people,” combined with the recently renovated Johnson Building, comprise the heart and soul of the Central Library and make manifest that the wonder of education can be driven by the wonder of its surroundings.

Fifty years after Bostonians founded their own genealogical society, they opened a grand public library that continues to provide resources beyond genealogy to residents and visitors alike.

2 thoughts on “‘Palace of the People’”

Leave a Reply to Rose A. Doherty Cancel reply