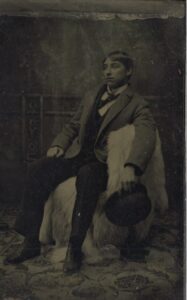 During St. Patrick’s Day week, when the NEHGS instagram account shared pictures of our Irish ancestors, I shared the picture at left of my great-great-grandfather Thomas Nelson Kelly (1853–1943) of Philadelphia. His parents, Joseph Kelly and Rebecca Nelson, both emigrated from Ireland in the 1840s and met and married in Philadelphia in 1850. Joseph and Rebecca are my only ancestors who arrived in the United States after 1776. I still do not know where in Ireland they came from (some family have said Belfast, some have said Donegal): I’m still searching!

However, my Kelly ancestors were Protestants, and known as “Orange Irish.” Joseph and Rebecca married at the Scots Presbyterian Church and their children were baptized Episcopalian. Their son Thomas, who marched in Philadelphia’s Orangemen’s Day Parade held in July every year, would later attend Tioga Baptist Church in the city. His wife Eliza Peltz was of mostly German ancestry. They had three children who lived to adulthood: John Peltz Kelly (1877–1955), my great-grandmother Mazy Nelson (Kelly) Helman (1883–1943), and Lidie Hilliard Kelly (1896–1986).

While all of my great-grandparents died before my birth, I did meet my great-great-aunt Lidie as a baby. My father and aunt told me stories of her that I had trouble verifying. They said she married an Irish-Catholic World War I soldier who died of the Spanish flu. My interest in this relative revived in the wake of our current pandemic. However, years ago I had searched Philadelphia marriage records for such a marriage and then came up empty.

Was there any truth to the story of this marriage?

Was there any truth to the story of this marriage? I asked my aunt for additional details. She had heard the story all her life: “It was an illustration of how fraught relationships were between Irish Catholics and Irish Protestants. I was told they married in the Roman Catholic rectory, secretly, and Lidie never admitted the marriage had happened, because she’d have to admit she agreed to raise the kids Roman Catholic. After they got married her husband went home, fell ill, his mom refused to let Lidie see him and he soon died. I’d wonder if the priest ever bothered to report the wedding if he knew the man was dead. So it might only be recorded in a parish register.”

Interesting! While I had searched the civil records of Philadelphia, I had never searched specific Catholic records. Philadelphia Catholic records are available on findmypast.com, and within a few minutes, I found their marriage at the Church of the Holy Child in Philadelphia. So who was this early 20th century “Romeo”? He had a very fitting surname — Thomas Joseph Montague!

Thomas and Lidie married on 2 October 1918. He did serve as a private during World War I, but was never overseas, and had been honorably discharged on 10 May 1918. The marriage was indeed short-lived, and he died just twelve days later on October 14. His cause of death was “broncho pneumonia,” with the contributory cause of “epidemic influenza.” 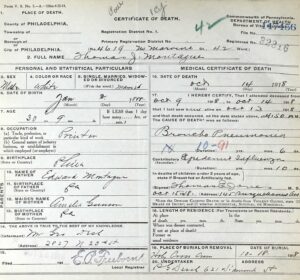 While Thomas Montague is listed as married, his wife was not the informant. His death notice in the Philadelphia Public Ledger (in which nearly two pages of deaths were mostly from pneumonia or influenza), only referred to him as the son of Amelia (née Gunson) Montague, so perhaps there was some truth to his mother not letting her son see his recent bride. Upon sharing these documents with my aunt she noticed from his death certificate that Thomas had been under the care of a doctor since October 9 (seven days after the wedding), and that Philadelphia had a big Liberty Bond parade on 28 September 1918. The incubation period for this influenza (per the National Institute of Health) was two to seven days, and probably Thomas went to the parade and was already getting sick by the time of the wedding.

So in the case of this family story, it indeed checked out, even if at first glance records suggested otherwise!