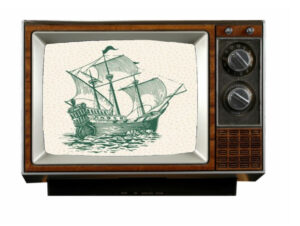 … I learned from the TV.

Did I say television? The boob tube? Is that possible? Well, actually, before I learned about the Mayflower on TV, I was taught the story of the Pilgrims in various elementary school Thanksgiving pageants. They were quite inspiring, if not downright fanciful. It wasn’t until many, many years later that I read Nathaniel Philbrick’s Mayflower: A Story of Courage, Community, and War, an extremely interesting read that I highly recommend. It tells a story that is much more accurate than the one in the pageants, and thus, much more bleak, if not tragic.

A bit later (2015 to be exact) I watched the PBS-American Experience made-for-TV movie The Pilgrims. The Pilgrims was filmed largely at Plimoth Plantation, which really added to the period-specific experience for me. The film is not highly rated on IMDb, but I found it fascinating. The “most helpful” reviewer didn’t like that William Bradford was played by the elderly Roger Rees:  “Although the words he read (spoke) were interesting.” Fortunately, the reviewer concludes “we did learn some stuff while watching it. 5/10.” Another reviewer (2/10) titled their review “Dark and grim portrayal of the Pilgrim’s Experience.” Gee, what happened to those happy grade-school pageants?

“[Also], the Pilgrims were taken aback by how scantily dressed the Native Americans were.”

I also enjoyed the two-part television mini-series Saints and Strangers, which also has terrific period-production values. But, having been filmed in South Africa, I found the mountains in the background of some scenes a bit disconcerting. When I visited Plimoth Plantation a few years ago, there were no mountains to be seen anywhere. Even so, the film was extremely interesting. The IMDb reviews vary from “This project must become a classic. It reveals that our sentimental notions about Thanksgiving don’t reveal the truth” and ”Outstanding Miniseries: Well Researched and Beautifully Filmed” to “also, the Pilgrims were taken aback by how scantily dressed the Native Americans were. The Native Americans in this production are in full leathers! Another grievous error!” Well, there are grievous errors and not-so-grievous errors. The erroneous costumes of the Native American actors didn’t bother me. Personally, I was happy to see that all the Native roles were played by Native actors.

In any event, both TV shows are highly recommended by me. As is a visit to Plimoth Plantation for anyone interested in the story of the Mayflower, the Pilgrims, and the Native Americans who helped them to survive.

10 thoughts on “Everything I learned about the Mayflower”