For the past year I’ve been focusing more on researching in old newspapers, and have had some amazing luck. Recently, newspapers led me to a collection of records that, while small, could be invaluable to anyone researching Irish ancestors who lived in Boston, Massachusetts.

My great-grandparents, J. Frank Doherty and Harriett Storen, were born in Montreal where they married and had three children. After the death of their oldest child in 1905, the family moved down to Boston where they had six more children, including my grandmother. Frank, who was a self-employed realtor, died suddenly in 1923 at age 47. By all accounts from my grandmother and her siblings, Frank’s death left the family really struggling, and all the children who were old enough to get jobs went to work to help support the family. The children ranged in age from 4 to 19 when he died.

Newspaper articles reveal that before his death, Frank was a well-known and respected member of the community in Boston. I found many articles about Frank’s leadership roles in the Massachusetts Catholic Order of Foresters (MCOF), which was an Irish Catholic fraternity that sold life insurance to its members. The MCOF was established in Boston in 1879 and arose from the prejudice against insuring and employing Irish immigrants. The organization still exists today, and is known as the Catholic Association of Foresters.

A review of the organization’s website revealed that their records from 1880 to 1948 are housed at UMass Boston at the Joseph P. Healey Library, and that those records can be requested by mail for $10. The collection includes a very handy online search index, and all you need input is a surname to peruse the available records. 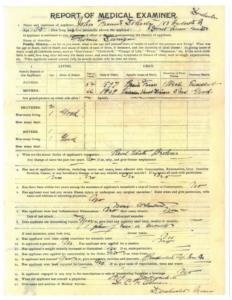 It took more than a month to receive the 10-page record by email, but it provided a wealth of information. The file contained Frank’s Application For and Contract of Membership, which listed his parents’ names, including his mother’s maiden name, as well as his wife Harriett’s name and date and place of marriage. It also had basic information like his date of birth, address, and occupation.

The application also included a medical report, which contains the results of a physical examination. On this page, Frank lists his parents’ age at death and dates of death, as well as the causes of death. It further lists his siblings, and this item provided information I hadn’t seen anywhere. My research over the years has produced the names of only two siblings – a brother and a sister. This report states that Frank had two brothers, but that only one was living. I’m now on the hunt for that other brother. 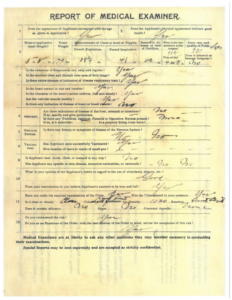 I did find that Frank may have fibbed a bit during his medical exam. In answer to the question, “Does applicant use intoxicating liquors? If so, give kind and quantity used daily, weekly or monthly.” Frank responded, “1 glass of beer a month.” Let’s just say that based on family stories, Frank was not known for moderation when it came to alcohol.

Some of the documents in the file originated after Frank’s death, such as a copy of the check for the $1,000 insurance proceeds paid to Harriett. Another document lists the names and ages of all his children.

Although I already had a great deal of information about Frank and Harriett, I couldn’t believe the detailed genealogical information contained in the MCOF records. I ran many other family names through the index and did find one other relative, who was entirely unrelated to Frank and Harriett.

Because my mom and my dad’s families were both from Boston, this record set is sure to be one that I revisit often as I add family members to my tree.

6 thoughts on “Catholic Association of Foresters”