As the conservator at American Ancestors and NEHGS, I spend much of my time conserving our book and paper-based collections while also devoting a little bit of time to thinking about the future preservation of these items. This leaves relatively little time to reflect on past efforts by the organization to preserve these collections, but there is evidence that those efforts were considerable.

Preservation was a major part of the reason for founding the New England Historic Genealogical Society, as outlined in the original Charter.[1] Collecting and preservation have always been tied together; if you are going to collect books and manuscript materials, efforts will need to be taken to make sure they will be available for future generations – particularly important for a genealogical society, where generations really matter. Books with gift bookplates from the 1840s attest to how long some of the materials have been preserved in our library collections, including the bookplate (above) from 24 July 1847, on one of our copies of Letters from the English kings and queens, Charles II, James II, William and Mary, Anne, George II … to the governors of the Colony of Connecticut, together with the answers thereto, from 1635 to 1749 by Royal Ralph Hinman.[2]

An earlier treatment to preserve this book, performed sometime in the middle of the twentieth century, is visible on the right in this image covering part of the bookplate. Although the materials and methods have changed since that time, the preservation effort has helped to keep this book as a useable research item in our collections, one that has been available for almost 173 years. 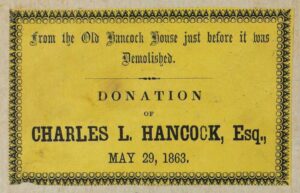 Other gift bookplates demonstrate the Society’s role in the preservation of at-risk cultural heritage even as the former protectors of that cultural heritage have failed to survive. Our copy of The history of France, from the most early records, to the Confederation in 1790 by William Beckford has a bookplate denoting that the book was saved from the Old Hancock House just before that house was destroyed in 1863. Also known as Hancock Manor, the building was considered one of the grandest houses in Boston in the eighteenth century and was the home to John Hancock, President of the Second Continental Congress and a signer of the Declaration of Independence, from 1744 until his death in 1793. The book was donated to our collections by one of John Hancock’s collateral relatives, Charles L. Hancock. 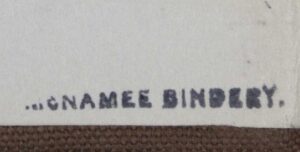 Other physical evidence in the books shows that much of the preservation efforts in the past were outsourced to local binderies, including the McNamee Bindery founded by John H. H. McNamee in the 1870s and Acme Bindery, started by a former employee of the in-house Harvard Bindery, which was sold by Harvard in 1957.[3] Some of this binding work was paid for by generous members who left NEHGS funds for binding, including the Barstow Fund and the Thomas Crane Fund, which was established by his son, Alfred Crane, in 1895. The rebinding of books and binding of journal collections has been a continuous part of the preservation efforts here for more than a century, except for a suspension of binding due to war rationing during World War II.[4] We continue to use Acme Bindery for some of our journal collections today, although we do most of the treatment of our collections in-house. 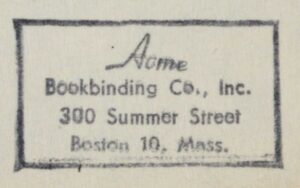 Early in-house treatment of the library collections was carried out using commercially available materials and binders; the most popular ones among these were pamphlet binders, since many of the monographs collected by the library were family genealogies in soft covers. Unfortunately, some of these commercial binders have damaged the volumes over time and must be replaced, although they have protected some items for more than a century.

NEHGS attempted to bolster their in-house conservation capabilities with a grant from the National Endowment for the Humanities in 1977, seeking funds to equip a conservation lab and hire a conservator, but the grant was unfortunately not successful.[5] The organization did make headway on preservation information in the early 1990s with an “Adopt a Book” program that was initially started by Denis Dahill. Books with poor quality paper from the nineteenth century were photocopied onto a better quality, acid-free paper and then bound as a surrogate copy that could be handled.[6]

In that same year the William Allerton Cushman Book Restoration Fund was set up to provide annual funds to aid in the effort to save brittle books.[7] It was around this same time that NEHGS started to have yearly interns from the North Bennet Street School working on preserving library collection materials. Eventually, one of these interns stayed for more than a year, as Deborah Rossi became the first full-time staff member dedicated to preserving the library collections. Under her guidance a new conservation lab was established on the sixth floor in 2013.[8] With a full-time conservator, dedicated volunteers and interns, and the support of the organization and its members, we hope not just to continue our preservation efforts but to expand them and keep our materials available for research for the next 175 years and beyond.

[6] By 1996, more than 1,000 contributions had been made to the fund with gifts of $75 or more being recognized with a bookplate in one of the photocopied books.