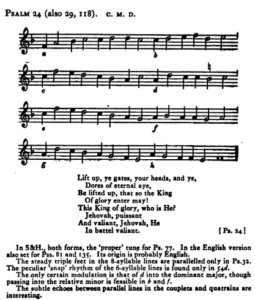 The first book published in North America was a book of hymns. This shouldn’t be a surprise, since music has been a connecting force (not only for religious reasons) that has a way of spreading joy and sorrow. It is universal.

One of the best ways to learn and understand a culture is through its music. So for me, when deciding what to write about for this post, a big question that popped into my head was: What did the Pilgrims sing?

As the music scholar Waldo Selden Pratt writes, “it is surprising that there is so little intelligent reference to the musical side of Plymouth life… But we do know that song in worship was one of their cherished and characteristic customs.”[1] Although women were not seen singing alone in public at Plymouth, the Pilgrims liked to sing.

So: When, where, and how was music created at Plymouth?

Mainly, music was heard at church. Instruments were not allowed, so a bystander would have only heard voices singing simple melodies. These melodies came from a book published in Holland and brought to the Americas by the Pilgrims. The Ainsworth Psalter, which was used by the Pilgrims until at least 1692, was “prepared for the fugitive congregations of ‘Separatists’ in Holland by Henry Ainsworth and published in Amsterdam in 1612.”[2] The psalms within the book are influenced by the English, Dutch, and French, because Henry Ainsworth was originally from England; he moved to Amsterdam, where French and Dutch reformed churches were prominent.

Instruments were not allowed, so a bystander would have only heard voices singing simple melodies.

Ainsworth wrote about these cultural influences in his Psalm Book:

“Tunes for the Psalms I find none set of God; so that each people is to use the most grave, decent and comfortable manner of singing that they know. The singing-notes, therefore, I have most taken from our former Englished Psalms, when they will fit the measure of the verse. And for the other long verses I have also taken (for the most part) the gravest and easiest tunes of the French and Dutch Psalms.”[3]

For those interested in history, I strongly suggest singing some of the psalms found in the Ainsworth Psalter. It might give you a different insight into the lives of the Pilgrims. And Mayflower descendants, it might create a deeper connection to you and your ancestors.

[1] Waldo Selden Pratt and Henry Ainsworth, The Music of the Pilgrims, A Description of the Psalm-Book Brought to Plymouth in 1620 (Boston: Oliver Ditson Company, 1921), 6.

5 thoughts on “Music of the Pilgrims”