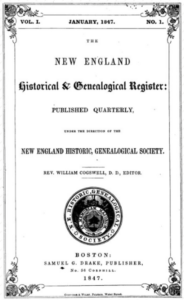 Shortly after the founding of the New England Historic Genealogical Society in 1845, the first issue of The New England Historical and Genealogical Register was published. The Register first appeared in January 1847 and was the visionary work of the Society’s first president, Charles Ewer. Mr. Ewer envisioned a society made up of hundreds of members, offering a physical library to house thousands of volumes of books, where a publishing program would expand upon the work of John Farmer’s Genealogical Register.

Mr. Ewer’s goal was to create a quarterly journal of history and genealogy that “would give members of the Society a further vehicle for research, discussion, and writing about New England’s Puritan fathers as well as fill a deficiency in historical literature by providing information on families.”[1] Additionally, he wanted to rescue records that were being destroyed in public offices and present them as transcribed and printed resources for future research.[2]

To this end a publications committee was established to support this new journal and, for the most part, the project was met with optimistic enthusiasm. While a few regarded the enterprise as an experiment, others felt there was a good chance a profit might be made and there would be a long life for the publication.[3]

The inaugural issue set out the framework for the future of the Register. In this number, the founding editor, the Rev. Dr. William Cogswell, D.D., addressed the question “Why issue a new publication?” The reply: “There is no work of its kind in the country, and one seems to be much needed.” Dr. Cogswell went on to identify what would be included in the Register:[4]

True to this mission, the first issue featured a memoir of the “father of genealogy,” John Farmer, and included a genealogy of the Farmer family. By the end of the first year, the first four issues had been completed and the community of critics was offering accolades for the original historical work.

One hundred and seventy-five years after the founding of NEHGS, President Ewer’s vision remains relevant and embedded in the organization.

One hundred and seventy-five years after the founding of NEHGS, President Ewer’s vision remains relevant and embedded in the organization. The membership has grown beyond hundreds to more than 270,000 members; the physical library has expanded beyond the walls of Room 9 of the City Building in Court Square to the eight floors of 97–101 Newbury Street; a library collection has grown to include more than 200,000 books and 1.6 billion digitized records (a reality the founders would have never been able to fathom); and the publishing program has grown from a small committee to entirely separate business entities that publish a broad range of materials including compiled genealogies, study projects, and magazines. But at the core is the Register that began 173 years ago with a small group passionate about the work, a few hundred subscribers, and an investment from the Society – an investment which created the flagship publication that may be regarded as the premier and longest-running publication of its kind in the United States.

1 thought on “In the beginning”