Twelve years ago, my family moved back to Salem, Oregon – the city where my husband had gone to college, and where we spent the first three years of our married life together. As the movers hauled furniture into our new home, we were welcomed with fresh bread and warm greetings by our new next-door neighbors. My husband recognized Tom right away as his former economics professor, which seemed like a lovely coincidence.

At some point over the years, we discovered that Tom had attended Pomona College, which my father also attended, but their years hadn’t quite overlapped. Then last year Tom and Priscilla hosted a bon voyage party just before our sabbatical trip, inviting everyone on the email list I’d used to send our itinerary to family and neighbors. My mother recognized Tom as a high school classmate, and we thought that was another fun coincidence … though in a school with 2,200 students, that didn’t mean they’d rubbed elbows frequently. 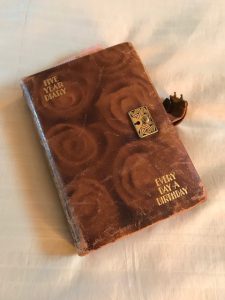 Just as Tom and Priscilla were packing up their belongings this summer and preparing to move into a brand new house, my mother gave me a family treasure. It was the 5-year diary that Grampy gave to Grammy for their first anniversary, two weeks after my mother’s birth.  It was interesting to read about my grandparents settling into parenthood, dealing with landlords, and taking walks through the same neighborhood where our younger son recently attended college.

Then, almost exactly six months into the diary, there was this entry: “Went to H_____s. Had nice time.” I wondered whether this might be Tom’s parents. Their name is fairly unusual, and I was able to check how many folks by that name lived in Portland in 1938 through a directory available on Ancestry.com. There were only half a dozen or so listings, and only one in the same quadrant of the city where my grandparents lived.

My hunch was confirmed a few pages later with this entry: “Dewey came & wrote L. a $5000 life Ins. Am so glad we’re saving.” Well, no doubt about it now! I knew Tom’s father was named Dewey, and that he had been an insurance salesman. However, I never dreamed that I’d find his family mentioned eight times in my grandmother’s diary, indicating that they socialized together for a couple of years. As I told Tom just before he and Priscilla moved away, “Looks like you and my mom were pushing one another down and grabbing each other’s rattles!”

What I didn’t think to tell him was that years later, when Grampy’s employers retired and sold their business, my grandfather was looking for a new career in his fifties. I’m not sure what all he considered doing, but what he settled on was selling life insurance … and I’m pretty sure this would never have occurred to him if he hadn’t felt well served by Tom’s dad. Kudos to him!