Twenty or so years ago a lady who exuded friendliness came strolling along the Bathing Beach in Hingham where I have been a daily summer swimmer for the better part of thirty years. Back then, as one of several dozen regulars who called ourselves “Beach Bums,” we congregated at high tide to collectively share that little slice of sand and salt water, each enjoying it in our own way. With her folded towel tucked under her arm, the lady approached us, clearly ready for a swim, and introduced herself as Rosie. It wasn’t long before she was a beloved member of the group, a group that has now sadly dwindled. Rosie and I, and two or three others, are the last regulars.

I remember Rosie telling us that she was new to Hingham, although, as we soon discovered, she was, in an ancestral sense, the ultimate “townie.” She and her family had recently moved into the historic Major General Benjamin Lincoln house, adjacent to Fountain Square on the corner of North and Lincoln Streets, in the heart of downtown Hingham, a town founded as Bare Cove by Puritans from East Anglia in 1633 and incorporated as Hingham in 1635.

After the initial distribution of land lots, a small triangular lot of land was granted to Thomas “The Cooper” Lincoln as compensation for a highway that had been built through his home lot. According to the Hingham Historical Society, the original section of the dwelling was built c. 1665 by Thomas, General Lincoln’s great-great-grandfather.[1] Thomas subsequently gave the land (and a malt-house) to his youngest son, Benjamin Lincoln (1643–1700), the first of four generations of Benjamin Lincolns – farmers and maltsters – to occupy the house. Over the years the house grew, the last addition made most likely in the late eighteenth century by General Lincoln himself.

As Rosie and I became friends, I had the privilege one afternoon of being invited to her home for lunch and a tour. Because the house had never been altered or restored, and because so many of the furnishings had belonged to General Lincoln, his wife Mary Cushing, and their children, it was not difficult to imagine oneself having been invited by them to their home. Rosie took great pride in showing off her home and telling me all about her Revolutionary War ancestor, whose most significant role during a lifetime of service to town and country may have been the duty bestowed on him by General Washington, as Washington’s second-in-command, to accept the British surrender at Yorktown.

When I told Rosie that her presentation was captivating and that I could easily have mistaken her for a seasoned docent, she explained that she was becoming accustomed to giving the tour. It seems that the bronze marker on the outside of the house enticed passersby who, not realizing that it was a private residence, knocked on the door hoping for a peek. No one was ever turned away.

In those days, I had yet to explore my own ancestry, and, having moved to Hingham when I was four, had no inkling whatsoever that I could have Hingham connections. But as my ancestral tree branched out, I was quite surprised to learn that, indeed, I did have Hingham “roots.”[2] And as my research continued, I was even more delighted to discover that I, too, am a Lincoln descendant (on my Cape Cod Baker line), though not from the General. While Rosie and I both share an ancestor in the first Benjamin who married Sarah Fearing, I descend from their son Thomas (1674–1739), who was the younger brother of Rosie’s ancestor Benjamin II (1672–1767). Nonetheless, I couldn’t wait to tell Rosie.

The Lincoln name shines in Hingham as among the town’s earliest settlers and most notable, civic-minded families.

The Lincoln name shines in Hingham as among the town’s earliest settlers and most notable, civic-minded families. Local histories suggest that as many as eight individuals with the name Lincoln arrived before 1640. In The Great Migration Directory, Robert Charles Anderson offers entries for six, four named Thomas who, unrelated, are distinguished from one another by their occupations – miller, husbandman, weaver, cooper; one named Stephen; and one named Samuel, the younger brother of Thomas “The Weaver,” and an ancestor of Abraham Lincoln.[3]

Thomas “The Cooper” Lincoln (1600–1691), the immigrant ancestor of General Benjamin Lincoln, arrived in Hingham in 1635 from the west of England – Beaminster, Dorset – though the Lincoln name is a common one in Old Hingham, Norfolk, home town of other early settlers like Peter Hobart and Robert Peck.[4] In Beaminster, Thomas Lincoln married Avis Lane (1606–1683), the daughter of William and Agnes Lane.[5] Five children, three sons and two daughters, are recorded as having been baptized in Hingham; three sons and one daughter are mentioned in Thomas’s will, dated in 1688.

The house at 181 North Street had remained in the Lincoln family, in an unbroken tenancy, for more than 350 years – eleven generations. Back in November 1972, it was designated a National Historic Landmark, and in 2009 a preservation restriction was negotiated with Historic New England to protect both the interior and exterior character of the house. Rosie and her family had been the latest to take on, as she described it, the privilege of caring for the historic house, its antique furnishings, personal family heirlooms, and the legacy of the Lincoln family, which some histories refer to as one of America’s first family dynasties.

But, earlier this spring, the Benjamin Lincoln house was listed for sale. One newspaper story noted that for potential buyers the house offered a real-life piece of history. The Hingham Historical Society, recognizing the once-in-a-lifetime opportunity to acquire that piece of history for the town and share it with the public, began discussing that possibility with the owners. The house has now been taken off the market and the Historical Society has until June to raise funds to purchase and endow the house.

The Benjamin Lincoln house is one of a cluster of visually evocative and transcendent buildings that create a unique local landscape encircling Fountain Square, a green space graced by a statue of Abraham Lincoln and a handsome bronze tablet honoring General Lincoln. The neighborhood includes the 1686 Old Ordinary (in whose taproom the good General likely enjoyed a strong ale) and its Olmstead-designed garden, a property owned by the Historical Society; the Samuel Lincoln House (1721) and the Samuel Lincoln Cottage (c. 1650), both private residences; and the New North Church (1807), one of whose founders was General Benjamin Lincoln. 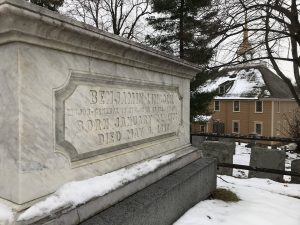 Steps from Fountain Square is the Old Ship Meetinghouse (1681), also a National Historic Landmark, where generations of Lincolns worshipped. Behind the meetinghouse is the Hingham Cemetery where General Lincoln (1733–1810) and many Lincoln family members are buried. Next door stands the stately, Federal-style Old Derby Academy (1818), America’s first co-educational school, founded in 1784, whose trustees included General Lincoln; it is now the Heritage Museum and Visitor Center and headquarters of the Hingham Historical Society. [6] Each year, in February, the Society celebrates Lincoln Day.

Holistically, it makes sense that the General Benjamin Lincoln house should be woven into this rich downtown tapestry that already preserves so much Lincoln history. More than a house, within its walls is the cultural story of not only a family, but also a town, a witness to an evolution from seventeenth-century farming community to twenty-first-century suburb. For eleven generations the Lincoln family has lovingly preserved the home and honored the memory and civic contributions of their ancestors.

Now it’s the turn of the village.

[1] Lincoln family tradition suggests that the dwelling was begun as early as 1637, though there appears to be no architectural evidence to support the claim.