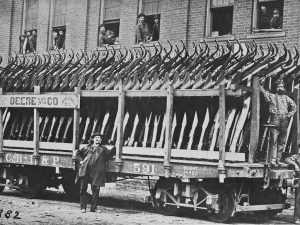 As pioneers migrate from one area to another, they often find that circumstances require changes in the way they do things. One such example involves a pioneer named John Deere. You may be familiar with the name as being associated with the manufacture of tractors and lawn mowers, but the beginnings of the company involved a different product, invented long before tractors or mowers came into existence.

John Deere was born in Rutland, Vermont on 7 February 1804 to William and Sarah (Yates) Deere. In 1808, William left for England hoping to claim an inheritance which might aid his family. He was never heard from again, and it was assumed he was lost at sea.

Facing difficult times, when John came of age, he apprenticed himself to a blacksmith, which trade he practiced in various towns in Vermont. In 1836, a downturn in the economy forced him to temporarily leave his young family and seek better prospects further west.

He settled in Grand Detour, Illinois, and found an immediate need for his skills. He soon discovered that his neighboring farmers were having difficulty in plowing their fields. The wood and iron plows which they had brought with them from the east did not work as well in the rich soil of the Midwest. Where the New England soil was rocky, the heavy, sticky soil of the prairie would stick to the plows, requiring frequent cleaning. Deere believed this problem could be solved by using highly polished steel with the proper shape. After some experimentation, he produced a prototype, and by 1841 he was producing 100 plows a year. In 1843 he formed a partnership with Leonard Andrus to meet increased demand.

Where the New England soil was rocky, the heavy, sticky soil of the prairie would stick to the plows, requiring frequent cleaning.

In 1848 he ended his partnership with Andrus and moved the company to Moline, Illinois, where better resources were available. He also imported British steel to meet increased demand. By 1850 they were selling more than 1,500 plows per year and in 1857 the number of plows sold reached 10,000. The next year John handed the leadership of the company over to his son, Charles, but retained the title of president. (In 1868 the company was reorganized and incorporated as Deere and Company.) The Deere company continued to grow through the Civil War and added other agricultural tools and implements to their line. John turned to other interests, including founding the National Bank of Moline, serving as its president, as well as being an active member in the local church.

John Deere died at his home in Moline on 17 May 1868. It wasn’t until 1912 that Deere and Company sold its first tractor.

John Deere may be known for tractors made by the company with his name, but his contribution to the country was,  in reality, enabling pioneer farmers to feed themselves and others during the settling of the Midwest.

5 thoughts on “A grand detour”