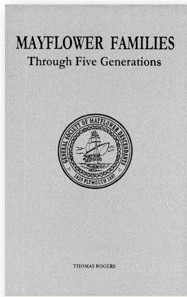 In an earlier Vita Brevis post, I introduced a free webinar that I conducted in August on the Top 10 Published Resources for Early New England Research. The Vita Brevis post was the first in a series of upcoming posts that will break down the top 10 list into individual discussions. The first post addressed what makes a published resource a “top 10” and analyzed the first published resource on the list, the Genealogist’s Handbook for New England Research. Today I will continue the conversation and talk about the second and third, in the “no particular order” list, of top 10 resources: Mayflower Families through Five Generations and New England Marriages Prior to 1700.

Mayflower Families through Five Generations, also known as the “Silver Books,” is published by the General Society of Mayflower Descendants (GSMD).

The work in these books is based on findings presented in carefully researched articles from respected genealogical journals, verified family histories supported by probate and land records, town and church vital records, and other primary sources. The sketches are written in Register format with the first generation given the number 1, and each of the children identified with a Roman numeral associated with the child’s birth order. Each child who will later be listed as a parent in the next generation is given an Arabic numeral, allowing efficiency when searching for descendants.

The Register style offers a beginning, middle, and end format for communicating genealogical research. The beginning introduces the Mayflower passenger by providing verified vital information. The middle is usually a biography in chronological order, and the end lists children and their vital data. When enough information is available, the children are continued in their own sketch as part of the next generation. 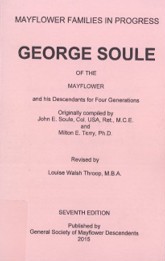 As research continues beyond the first five generations of Mayflower descendants, the new research is called Mayflower Families in Progress, or the “Pink Books.” They are available in paperback and, once completed, the Pink Books will become Silver Books. Currently the Pink Books cover George Soule, Richard Church, and William Brewster, and Philip Delano, who sailed on the Fortune in 1621.

Initially the Silver Books had been accessible only in print format, but AmericanAncestors.org and the General Society of Mayflower Descendants partnered to digitize and index the fifth generation, making it available to members of both organizations.

The Silver Books are an essential resource for anyone wishing to prove their Mayflower line and a top 10 resource for early New England research. 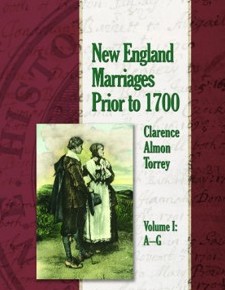 New England Marriages Prior to 1700 by Clarence Almon Torrey. This series is also known as Torrey.

Mr. Torrey scoured every book, manuscript, and periodical available to him at NEHGS between 1927 and 1960, resulting in the enumeration more than 99% of the known or presumed marriages in New England before 1700. He collected the marriages by writing them down on a slip of paper, along with the sources for the information collected, and then alphabetized the slips by groom’s surname. The slips were then rewritten onto whole sheets of paper bound into 500-page volumes covering 37,000 marriages.

This published work is considered a finding aid, which is a tool that helps a user access information. It can be thought of as something like a table of contents or an index: the finding aid assists in locating a specific record, collection, or piece of archival material.

It is important to note that Torrey’s was not created to be a proven vital record – it was created to be a finding aid to the published records that support the marriage. There can be inconsistencies and mistakes, but the text has remained in the original format and these errors and omissions are addressed in the footnotes or in bracketed interpolations.

It can be thought of as something like a table of contents or an index: the finding aid assists in locating a specific record, collection, or piece of archival material.

There are various editions of Torrey’s work. The most recent came out in 2011, and includes a list of sources and a comprehensive every-name index, making this an efficient and effective finding aid.

Despite the title suggesting this is exclusively a New England resource, there are a few other geographic areas included. Because much of Long Island, except for the westernmost part, was settled by New Englanders, Torrey included couples who settled or were married in Suffolk, Nassau, and Queens Counties. He also included couples who left Greenwich, Connecticut for parts of Westchester County, or migrated from New England to settle in Newark, Elizabeth, Piscataway, Woodbridge, or Cape May, New Jersey.

Torrey’s list is alphabetized by the groom’s surname and first name. Those with unknown first names are placed at the end of that surname section. The births and deaths are placed in parentheses and are available for both the groom and the bride. When a ? Is included, it represents a probable date. When there is a “+,” it indicates the person was living in that year and died at an unknown later date. The bride’s name is given in full when it is known, and in that case, it is usually seen with an actual marriage record. When the bride’s surname is within brackets, it is based on a good deal of confidence based on indirect evidence, such as a will or a deed. When the bride’s name is preceded or followed by a question mark, Torrey was less certain of the bride’s identity. When a bride’s name is given as two underscores, Torrey has found evidence of a wife but nothing about her identity is known. When a full marriage date is given, the record itself is almost always in existence, but if the date includes a “b” it indicates they were married “by” that date. Other abbreviations used are “abt” meaning about, and “ca” meaning circa.

The sources in the sketches are a cryptic shorthand of Torrey’s own creation, so examining the source list key found in volume III is essential to getting the most out of this resource. The source list includes all identified sources, but some remain unidentified. Most of his sources were located at NEHGS and can be found in the stacks, at the reference desk, in the manuscript collection, on microfilm, or in databases at AmericanAncestors.org.​

New England Marriages Prior to 1700 has been completely digitized and indexed at Americanancestors.org.