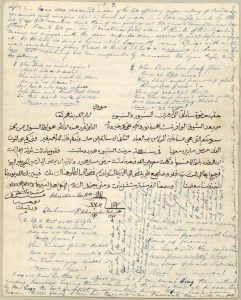 Let’s take a step back in time. Imagine yourself in the 1840s as the British are slowly expanding their power into places like New Zealand and Hong Kong, the Oregon Trail is not just a video game but a real expedition, and you have traveled to California to make your fortune in the Gold Rush. The United States is working hard at home all the while trying to establish itself on the world stage. The 1840s were also the early days of American missionaries — a significant and often controversial piece of history which I began to learn about through reading the correspondence of Leander Thompson through the NEHGS Digital Collections at AmericanAncestors.org.

Leander Thompson was a teacher and missionary for the American Board of Commissioners for Foreign Missions (ABCFM). The ABCFM was officially founded in 1810 by a group of former students from Williams College, in Williamstown, Massachusetts. Thompson left his home in Boston and served as a Christian missionary in Syria from 1840 to 1844. Later on, Thompson was elected a member of NEHGS and eventually became a life member until his death in 1896.

The first of his two long letters describes his journey from Jerusalem to Beirut, Syria (now Lebanon), while the second includes writing samples from his students as well as the incidents that occurred during his time abroad. The letters are addressed to Reverend Eli Moody, of Granby, Massachusetts.

The first letter begins in Jerusalem in 1840 with Thompson’s description of his travels around the area and their religious relevance. He often includes a Bible passage that alludes to the historic place or person he has mentioned. After several days, Thompson, his newborn child, his missionary companions, and all their wives begin and finish the fatiguing two-day journey from Jerusalem to Jaffa, in Tel Aviv, Israel.

Although comfortable in Jaffa, Thompson and his company continue on to Beirut as they ring in the new year of 1841. Thompson writes about their trip after arriving and reflects upon the various towns they passed with religious meaning, as well as his observations on the Arab and Islamic crew that sailed them to their destination. He remarks upon the crew’s routine to bow “as if the fate of the world depended upon their devotions.”

While he does not understand or enjoy their way of life, Thompson does not criticize their religious practices. He writes instead “that they are religious in their own way.”

The second letter introduces three letters from three of the boys in Thompson’s class in the seminary. Thompson includes a hymn that he “used to think . . . had meaning in America, but here that meaning has been unspeakably increased” due to the many tragedies they have endured, such as the untimely deaths of fellow missionaries and the lack of funds the mission is receiving. Beyond this, Thompson writes a detailed portrayal of the “secret plot to destroy our mission,” a long and dramatic conspiracy that must be read with one’s own eyes, and therefore I will not give too much away.

Thompson often speaks about “the value of a home,” and although he does not care about material possessions, he longs for a place to call his own. He ends the second letter wondering if the grueling and relentless life of a missionary is all worth it. This is amplified by the fact that a terrible storm has erupted and the place where they were staying flooded, ruining everything they had.

Letters never fail to provide insight into the life of someone we never would have known, a new perspective on the history we have always been taught.

Thompson’s experience is both one of a kind – giving us a look into a time of his life when he was out of his comfort zone, with the hope of changing someone’s life for the better (as he saw it) – and a preview of the missionary movement that would ultimately grow to involve tens of thousands of Americans in the early twentieth century.

Please note: You can view these letters and more in the Family and Personal Papers Collection.