That my great-great grandfather Charles Otis lived to be almost 90 is not highly unusual. It is the perspective of that long life that I find fascinating: as a youngster my father talked to a man who had lived with a Revolutionary War veteran. It shortened almost 200 years to a concept I could mentally grasp. I wanted to know more about a man who had seen so much history, so many wars, and so many advances in industrialization and technology. I had heard some stories from Dad about Charles Otis, some of which my father insisted I couldn’t publish until he was long dead. I wanted to align those stories with items I’d found in my research about Charles.

Whatever Charles was like as a young man, I’ll never know, but he was charming enough to win Mary Ann Stone as his wife, and they married on 4 February 1861 in Augusta, Maine. Dad remembered Mary Ann as a kind lady with a great sense of humor, and one who was always ready to listen to a young boy.

His wife’s horse, an otherwise gentle creature, would not let Charles ride or drive it, but would throw him every time.

Charles, on the other hand, in later life was not known as a well-liked man, despite his involvement in his community. He played on the community baseball team, participated in town politics and was active in the Democratic Party (e.g., Augusta’s second assessor in 1884), and was the trustee of the Red Schoolhouse established by his grandfather, George Read (https://vitabrevis.americanancestors.org/2015/11/red-white-schoolhouses/). One newspaper obituary kindly said he was “slow to make up his mind, once he did, he held his point unwaveringly.” (So Grumpy Gramp was stubborn!) Even some of the farm’s horses didn’t like Charles Otis: his wife’s horse, an otherwise gentle creature, would not let Charles ride or drive it, but would throw him every time. 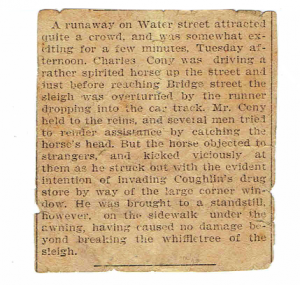 A paragraph in the local newspaper seems to verify that story (or at least casts aspersions on Charles’ sleigh-driving abilities and the hazards of trolley tracks).

For years the family employed Alonzo Fletcher, a hired man who helped with the farming. One of the daily chores was to clean out the gutters in the cow barn by sliding open the base to shovel the manure into the wagon placed underneath in the scuttle. Alonzo, having to relieve himself, simply opened the gutter. Then began the hollering and yelling. He swore repeatedly (but with a less than convincing grin) that he didn’t know a now furious and damp Charles Otis was in the wagon.

And yet to some he was known as a man who showed “kindliness to all with whom he came in contact . . . a noble character.”

“It’s just like him to die right at chore time.”

When he died in the late afternoon of August 24, 1924, he had been out picking berries, and collapsed as he entered the kitchen, grasping the door frame so tightly that his family had to pry his fingers off, leaving a dent in the woodwork. His wife Mary Ann, She of the Great Sense of Humor, remarked “It’s just like him to die right at chore time.” She would survive him by only three years.

Whether Charles Otis is truly a curmudgeon or simply a man with strong principles, it doesn’t matter. He is like the rest of my ancestors, not Society People, just Salt of the Earth People. With notable ears.