William is a bit of an elusive character. According to the Daughters of the American Revolution he was born in Belfast around 1745. However, that may not be where he was from but rather where he left from. William Jack was likely “Scotch-Irish” and a descendant of Scottish immigrants who had settled, generations before, in the northern part of Ireland. Between 1717 and 1775 at least five waves of Scotch-Irish left the Ulster area, usually through the ports of Londonderry and Belfast.

The Scotch-Irish left Ireland for a number of reasons. The two main factors were the collapse of their lucrative linen-weaving trade and rack-renting. Rack-renting was the term used for onerous increases in their land rent. When the Scottish immigrants first came to Ireland, they were given long leases, typically 31 years, with low rents. After their leases expired, landlords often doubled or tripled their rents. Unable or unwilling to pay the increased rents, many chose to immigrate to America.

If William followed a typical Scotch-Irish migration path he probably sailed from Belfast and landed at Philadelphia. 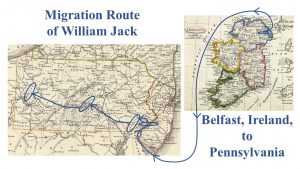 If William followed a typical Scotch-Irish migration path he probably sailed from Belfast and landed at Philadelphia. He may have arrived during the 1754 to 1755 wave as a child or during the 1771 to 1775 wave as an adult. Whenever he arrived, he was living in Chester County, Pennsylvania, possibly with one of six Jack families there, when he enlisted in the Chester County militia on 6 August 1777.

“Our liberties are dearer to us than our lives. . .”

During the Revolutionary War , William enlisted for two months to serve as a substitute in the Elk Battalion Militia under Colonel Evan Evans. He likely helped deal with the Chester County Loyalists who were aiding the British army as they raided the county in search of supplies during the fall of 1777. Although it is unclear if William served longer than two months, the Elk Battalion was a patriotic regiment with the motto “our liberties are dearer to us than our lives, and we will spend the last drop of our blood in defense of them.”

After the war, William married Lucretia Geer. Her parents, born in Connecticut, were of English ancestry. From at least 1785 to 1790, William and Lucretia lived in Wayne Township, Mifflin County. From there, around 1797, they moved to Venango Township, Butler County. William died in Venango sometime after 1810 and left four children: two sons, Samuel and John; and two daughters, Anna, wife of Oliver Rosenberry (my ancestor), and Polly, wife of William Hale.

3 thoughts on “My little slice of Irish ancestry”