My second-ever Vita Brevis post featured the story of how my grandfather[1] became a stationmaster for Pan Am’s flying boat operations in the South Pacific. On the morning of 8 December 1941 (on his side of the International Date Line), Papi oversaw the departure of a Pan Am Clipper flying boat from Noumea, New Calendonia, which would immediately thereafter enter aviation history by flying “the long way” back to New York over uncharted routes. At almost the exact same time (on the American side of the International Date Line), a young man named Joe Pease was at the dock of Pan Am’s Pearl Harbor facility, awaiting the arrival of another Clipper. Needless to say, Joe had the more exciting morning!

Decades later, their respective daughters met at periodic Pan Am “family” reunions, and discovered the two men’s parallel stories on that fateful day. They also discovered that each of their fathers had trained on Canton Island, a tiny ring-shaped coral atoll roughly at the intersection of the equator and the International Date Line. My aunt asked me a few months ago whether I could determine if they’d been on that blip in the Pacific Ocean at the same time.

Passenger lists viewable on Ancestry.com revealed that Joe Pease sailed aboard the steamship Lurline from San Franciso to Honolulu on Valentine’s Day 1941, and then took Pan Am’s American Clipper to Canton Island on February 26.[2] Meanwhile, my grandfather departed Canton Island on 4 March 1941 bound for Honolulu, with San Francisco as his ultimate destination. From these dates, I learned that Joe Pease replaced my grandfather as assistant stationmaster on Canton Island, with a few days overlapping. I also learned the importance of inspecting the actual online records, rather than going by the indexed dates and destinations. Many of the passenger manifests have been transcribed in batches, with all of the records (covering several dates and destinations) given the date and destination of the first page. So watch out!

From these dates, I learned that Joe Pease replaced my grandfather as assistant stationmaster on Canton Island, with a few days overlapping.

My aunt’s mission for me was accomplished. But something instantly popped out at me that would never have occurred to her: Pease is another of the oldest English names, appearing alongside Athearn, in the records of Martha’s Vineyard. In fact, the most recent issue of the Martha’s Vineyard Museum magazine contains a lengthy article about the “Pease Tradition.” Was Joe Pease one of those Peases?

Of course I had to follow that trail, and was able to confirm that, yes, he was. How ironic that two guys descended from John Pease and Simon Athearn – seventeenth-century inhabitants of an island off Cape Cod – should meet up on another island nearly three hundred years later! And here’s another irony: Joe made his “final departure” on 26 February 2004 – exactly sixty-three years after his flight to Canton Island – and from the same town where my aunt (who commissioned the investigation) now lives.[3] 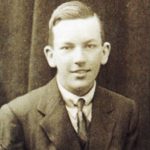 In my earlier article, I mentioned that British actor and playwright Noël Coward spent several weeks on Canton Island. It turns out that his stay included the scant week that Papi and Joe Pease were there together. Coward concluded reminiscences about his time on Canton Island in the second volume of his autobiography[4] with these words: “The week’s holiday I had planned had lasted sixteen days, but seemed somehow much longer than that” … because it was!

Immigration records indicate that he and his five pieces of luggage did not depart Canton Island until March 7, more than a month after his arrival. Also, it is clear from a letter he wrote to his assistant two weeks before his desert island adventure began that he had always intended it to be an extended visit of “a fortnight or a month.”[5] It is hard to explain how Coward’s narrative (evidently based on his diary) could have strayed so far from the truth, but as John Adams wrote, “Facts are stubborn things; and whatever may be our wishes, our inclinations, or the dictates of our passion, they cannot alter the state of facts and evidence.”[6]

[2] Joe left Canton Island in mid-September bound for San Francisco, where his first child was born in early October. His wife and baby daughter then flew to Honolulu on November 3 … slightly a month before Joe would witness firsthand the horrors of “a date which will live in infamy.”

[6] “Argument in Defense of the Soldiers in the Boston Massacre Trials,” December 1770.