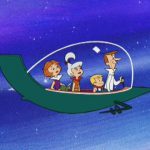 Something happened to me a couple of weeks ago. I haven’t wanted to say anything to you about it, as, well, it’s tough to admit one’s own genealogical shortcomings. And, yes, I haven’t wanted to appear more naff[1] than usual, but the truth is that I recently had to “do” genealogy the old-fashioned way, and I was a bit (no, really, quite) unsure whether or not I was still capable of doing just that. You see, for the last couple of years or so I’ve been whisking around my genealogical exercises a lot like George Jetson,[2] and the thought of getting back to basics – and maybe even using some of those old SASEs – was a bit daunting. (Please don’t tell my future fifth cousin “George” about any of this – I am related to his wife Jane “McElroy” Jetson on my mother’s side.[3])

Perhaps this apprehension is because I am “late bloomer,” coming to genealogy at the start of the 1990s and inheriting a lot of family history already completed by a dear cousin.[4] Like some of us, I started with my own research (more or less), as we all vaulted our way toward the study of family history with the dawn of the internet age. I can remember the first time I discovered familysearch.org and being amazed that such vital truths (and a few falsehoods) could truly exist. However, as the years have flown by since that time, I’ve started to notice a trend in the grist of my genealogical research. I’ve noticed that I have come to rely a bit too heavily on the “internet research” of others, finding those records posted to some website and then supplementing that research with what should have truly been my own.

Now, I don’t know that this is necessarily a bad thing. After all, we’d never make any progress or get past the “third estate”[5] of our own ancestors if we didn’t rely on the larger share in the research and findings of others, but – and this is a big “but” – the discoveries that we make on our own, indeed any of those discoveries that we might find for others to rely on – those are the true finds. These self-wrought discoveries, they are the true “jewels in the crown” in our contributions to the study, and in our continuing quest to know just who we are and where we have come from.

And, yes, you know me too well, for as usual, I digress… You see, all of this boils down to wondering if I still know how to actually “do” genealogical research beyond the realms of a Google search. This all began when a call came in a couple of weeks ago from a friend in another state asking me to go to an area library to locate a semi-recent obituary from a local newspaper. I thought, wow, can I still do this? My friend explained to me that from his vantage point it appeared that not all of the obituaries for this local Sacramento, California newspaper were on-line. Curious about this too, I quickly discovered that my friend was quite correct. 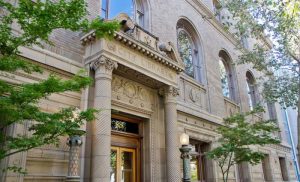 So I revved up my engine, and made the trek to the main Sacramento library. I know, I know, you’re probably thinking, Big deal, he drove to the library. Well, out here in Westeros,[6] things like libraries (those that have anything in the way of immediate holdings) can be more than a few miles down the road. What I mean by this is that we (at least out here) often forget that a library is a thing of beauty, and often a luxury. Furthermore, as I discovered when I arrived at that main Sacramento library, even here amongst all these records and books, one thing still held indomitable sway. Yes, even here at the actual library itself, “the internet” still seemed to govern and rule over the terms of any and all research.

Arriving at the reference desk that day I asked to see the microfilm for the local paper from “1987.” (Question: Was 1987 really that long ago??) I explained that I had reason to believe that the particular obituary I was looking for had never been imaged or indexed – that it might still be on microfilm. I was immediately told that “all” of those records had been imaged and were on-line now – implying that my request was perhaps a mistaken one, and also likely futile at best. The folks at the library kindly (and laboriously) checked (yet again) all the same web-based sources that that my friend and I had, and yes, it appeared that there was no record of the obituary (or of the person) I was looking for “on-line” – in 1987 … or in any year.

A bit befuddled by this, and not wanting to leave any stone unturned (or to be impolite to the kind librarian), I asked again to see the microfilm of the Sacramento Bee newspaper for that year. I should mention at this point I was getting a bit of the “Oh, you poor silly old man gaze…” from the kind gentleman who was helping me. He explained that what I was asking was rather “labor intensive” in terms of research (for me) and, that if it wasn’t indexed or imaged online that well, it would no doubt be a waste of time. Really? Have you met our kind?

And there it was – just the impetus I had been looking for – a challenge to find something after being told it would be all but impossible – the challenge to do genealogy “the old-fashioned way,” even if it was to merely locate a humble obituary from but a few decades ago. I suppose I did shake in my boots a bit, as I hadn’t looked through microfilm in twenty or so years, and that the thought of actually “doing” research and not finding what I was looking for would be a bit too discouraging. Oh yes, and there were a few thoughts of Where for art thou Google? Why have you forsaken me??

However, I am pleased to report to you my fellow researchers that the obituary (and its fading image) did exist. After a few scrolls through the old microfilm (and some extra quarters in the parking meter), there it was in all its late ‘80s glory surrounded by sports statistics and furniture ads. It came into view without index, without any online image, and without any URL to guide it along the way. I nearly startled when I saw it, there, just waiting to be discovered the old-fashioned way, defiant in its hazy black and white, as if to say, I knew you could do it Mr. Jetson.

[1] “Naff” – used in this instance to imply more “ridiculous” than usual.

[5] The “Third Estate,” as a descriptive only, used here for the “common people” in each of our own ancestries.

[6] “Westeros,” a land created by author George R.R. Martin, it is “a [fictional] continent located in the far west of the known world.”