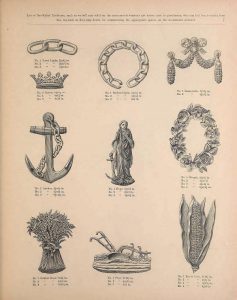 During a walk in the historic cemetery in my town, I spied a headstone perched at the edge of one of the steep terraced slopes. It caught my attention not only because it seemed ready to topple over the edge, but also because it was different: it appeared to glow with a bluish color in the spring sunlight. With a kind of eagerness, I suspected that it might be one of the “trendy” monuments that I had read about and that had had a brief popularity during the Victorian Era.

I made my way up the hill, reached the monument, and proceeded to apply the proof test by knocking on the surface (hoping and praying that no one would knock back!) and, indeed, it was hollow. I had found, quite inadvertently, my first example of a grave marker made of cast zinc.

What were the odds that in the next week or two I would stumble upon several other examples of zinc monuments, in two other cemeteries more than one hundred miles apart? The odds were, it turns out, very good as I experienced the phenomenon known as Baader-Meinhof or frequency illusion. It occurs when something we’ve recently encountered or been made aware of seems to be cropping up everywhere. If it seems like a kind of divine intervention, it’s not. It is simply that our brains are unconsciously keeping an eye open for another encounter. Without having to think about it, we’ve entered a heightened realm of awareness.

Without having to think about it, we’ve entered a heightened realm of awareness.

Zinc monuments – marketed with the fancy-sounding name of white bronze – were popular for about forty years, from 1874 to the advent of World War I, and offered a less expensive alternative to marble or granite, though detractors disparaged them as cheap imitations of natural stone and hardly a suitable way to honor a loved one.

Only one company, the Monumental Bronze Company in Bridgeport, Connecticut, did original casting for white bronze grave markers, but numerous subsidiaries, including those in Chicago, Des Moines, and New Orleans, and in Canada, did assembly work and distribution.

Sold by salesmen from illustrated catalogs that offered customers an array of sizes, shapes, and prices, the monuments could be built from stock panels that featured popular religious, fraternal, animal, patriotic, and military emblems. Because each section of the monument was cast individually and joined with molten zinc, the combinations were limited only by one’s imagination. Custom name panels and panels with favorite religious verses could also be cast, thus personalizing the monument and further adding to the variety of designs. The monument’s base was often finished to look like a block of rough stone. Rust-resistant, as well as resistant to moss and lichen, most white bronze monuments have weathered the elements better than natural stone, though they are prone to stress fractures and a bulging at the base from top-heaviness. An urban myth tells of family members hiding personal items, even money, in the hollow behind the panels. 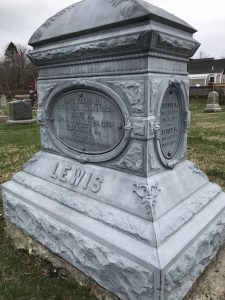 One of the white bronze monuments that caught my eye is a fairly elaborate “stone” belonging to Captain Isaac Baker Lewis of Provincetown.[1] Naturally, I couldn’t walk away without learning a little something about the captain (the curse of the genealogist), so I researched his story. Born in Provincetown in 1831, his prominence in the community earned him an entry in Biographical Sketches of Representative Citizens of the Commonwealth of Massachusetts.[2]

One of ten children born to Nathaniel Lewis and Azubah Snow, Isaac went to sea as a youth with his brother Nathaniel and later joined Nathaniel as the proprietor of a Boston fish market. After spending some time in Maine, Isaac returned to Provincetown in 1876. He had married Olive Ann Baker of Scarborough, Maine, in 1853. A daughter, Betsy W., was born in December 1854 and died in January 1856. (A second daughter, also named Betsy W., was born in October 1864 and died the same day.) A son, Isaac Wesley, was born in December 1856 and lived to adulthood. Olive died in 1869, and in 1871 Isaac married for the second time to Elizabeth Augusta Boothby, also of Scarborough. After 1880, Isaac was engaged in weir fishing.

In researching the family, I learned that Isaac was the brother of Bangs Atwood Lewis, a name that immediately told its own story. B.A. Lewis, a merchant and fisherman, owned Lewis Wharf, a lumber, coal, and ice wharf that had been home to a small fleet of Grand Banks fishing vessels. When Bangs A. Lewis died in 1913, journalist and social activist Mary Heaton Vorse purchased the wharf and offered the premises to a fledgling group of playwrights, artists, and intellectuals who came to be known as the Provincetown Players. During the summer of 1916, the Players staged a one-act play, Bound East for Cardiff, thus launching the career of Eugene O’Neill and ushering in the modern era of American theater.

The white bronze headstone for the Captain Isaac Lewis family includes a personalized panel for Isaac and his two wives, and a panel for the two young Betsys who did not survive. A third panel, in memory of a young man named Charles H. Giles (1859–1889), intrigued me. It features a crown motif encircled by what appear to be crosses, symbolism that could represent victory and Christianity and possibly a fraternal relationship. Embedded in the crown are the letters V.M.C., a motif I had never seen. An inscription on the panel, “A kind brother and a faithful friend,” further suggested a fraternal affiliation, a possibility I pursued after ruling out a family – brother-in-law, perhaps? – relationship between Charles and Isaac.

During the summer of 1916, the Players staged a one-act play, Bound East for Cardiff, thus launching the career of Eugene O’Neill and ushering in the modern era of American theater.

Born in Manchester, New Hampshire, Charles H. Giles was living in Provincetown and working for Isaac B. Lewis when he died of tuberculosis at the age of thirty. His death certificate listed his occupation as teamster, a term that originally referred to the driver of a team of draft animals.  The motto V.M.C. – Virtue, Mercy, Charity – indicates his membership in an organization named Royal Arcanum, a fraternal benefit society founded in Boston in 1877 and still active today.

Though the era of white bronze monuments was short-lived and the monuments are thinly scattered across cemeteries, it was the monument’s uniqueness among the marbles, granites, and slates that caught my eye and prompted me to stop and reflect on the lives buried there. Everyone is connected to the larger community and has a story that deserves to be remembered. If only we could tell them all.