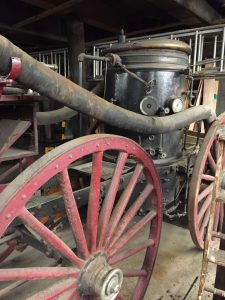 The Jeffers Engine sits in the basement of Station 2 of the Woonsocket Fire Department, covered in dust and surrounded by workout equipment. Built by William Jeffers of Pawtucket, pulled first by hand, then by horse, and now missing its pump, the first steam fire engine the department purchased in 1872 is a far cry from the massive engines in the garage above.[1] Something in the large red wheels and the big dull water drum shares their spirit, though. It too once raced through the streets of Woonsocket towards scenes of danger, carrying fire fighters just as determined to save lives and livelihoods as those who serve today. 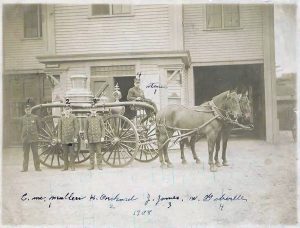 A hint of the glory days of the Jeffers Engine can be seen in a photograph from 1908. One of many historic Fire Department photographs now held by the Woonsocket Historical Society, this neatly-labeled photo shows the Jeffers Engine standing in the yard with a crew of four men. With a bit of digging in the census records and city directories, we can learn the full names and something of the lives of these men. At least three of them were first-generation Americans, and they all held many jobs over the course of their lives. At least some of their time was spent atop this steam engine.

6 thoughts on “The Jeffers Engine”