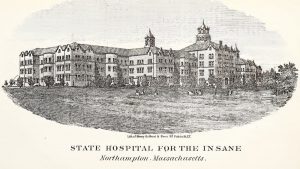 During the late summer of 2011, having then recently been afflicted with genealogy fever, I found myself day after day at the Massachusetts State Archives in front of a microfilm reader. I’m one of those lucky descendants whose ancestors, for the most part, were born in Massachusetts and remained rooted in Massachusetts, so I quickly amassed a binder full of vital records and began learning details about my great-great-greats.

In the quiet of the research room, I met a woman who was trying to piece together her Irish ancestry. I remarked that the prospect of heading overseas, figuratively and literally, to research my own Irish ancestry was daunting, and that for the time being I was concentrating on the family of my maternal grandfather who, I had recently learned, was from Salem, Massachusetts. Over the course of our whispered conversation, the woman told me about a genealogy group that then met monthly at the Archives. They were a spunky group, she said, mostly retirees who were researching their Boston Irish ancestry, but since I was so new to genealogy she thought I’d benefit from their experience. I showed up for the next meeting.

At each subsequent monthly meeting throughout the fall and winter, the only thing that the participants seemed to be talking about was the 1940 federal census, due to be released in April 2012. Though I had made very productive use of the earlier federal censuses and had been, like so many other family historians, dismayed by the loss of the 1890 census, I couldn’t quite understand the giddiness (dare I say hysteria) that surrounded this upcoming event. There was even a speaker at one of our meetings who offered tips on preparing one’s research plan, a detailed road map so that, presumably, when the census hit the cyber waves not a moment of research time would be wasted. From sideline spectator, I soon found myself appreciating the excitement and anticipation.

For those family historians who had been at genealogy far longer than I, who had mined every vein, plumbed every depth, probed every possibility, and had hit what seemed to be insurmountable brick walls, the 1940 census offered something brand new to explore.

For those family historians who had been at genealogy far longer than I, who had mined every vein, plumbed every depth, probed every possibility, and had hit what seemed to be insurmountable brick walls, the 1940 census offered something brand new to explore. It offered hope, a shot of genealogical adrenaline that might just jump-start their worn out research. One woman in our little group confided that her bedtime prayers included a plea to the good Lord to let the 1940 census show her the way! I suspect there will be the same euphoria – and prayers – when the 1950 census is nearing its 2022 debut.

It had been ten years since the previous snapshot of America had been made available to researchers. A lot can happen in a decade, especially during the Depression years when so many families were on the move in search of a better life. Where would everyone find uprooted and far-flung kinfolk during that despairing time in American history? How many had simply disappeared from the day-to-day interactions that previous generations had maintained and that had kept families connected? Could we ever know where they had finally put down new roots? For family historians without the benefit of prominent ancestral circumstances and continuity, without diaries, letters, heirlooms and even, perhaps, a headstone, government documents such as the census may be the only place where the peregrinations of an ancestor can be pieced together. As I grew to appreciate the magnitude of what the 1940 census meant to so many, I still had no expectations that it would contribute to my own research and certainly no expectations that it would become a linchpin for an aspect of the project I was working on.

In an earlier post, I wrote about my grandfather’s childhood in Salem, Massachusetts and his placement, in 1907, with the Home for Destitute Catholic Children in Boston. His older brother George James, born in Salem in 1902, had also been admitted to the Home but the brothers were soon placed with separate foster families. George had first been placed with a family in Boston but was later moved to western Massachusetts. My grandfather had remained in the greater Boston area with numerous placements over the next five years.

I had found George, as a seventeen-year-old, on the 1920 census living with his foster family and working as an apprentice at the local newspaper. In 1930, he was still living in Springfield and still working at the newspaper as a compositor. After 1930, I was able to trace him through the Springfield city directories until 1938, when he seemed to disappear, though I knew, from the Social Security Death Index, that he had lived until 1978.

Resigned to the possibility that I might never “find” him again and learn his fate, and that my research about my grandfather’s circumstances may have hit its own brick wall, I nonetheless did what everyone else did on 2 April 2012: I entered the names of each of my family members into the 1940 census search box. Most family members were where I had expected them to be, but to my utter astonishment I found a George J. Osborne as a patient at the Northampton State Hospital, the third Massachusetts institution for the insane, built in 1856. Though his stated age was off by about six years, his birthplace was noted as Salem, Massachusetts. Could there be another George J. Osborne born in Salem, who had previously been living for years in Springfield, just twenty miles from Northampton? I was certain he was my grandfather’s brother.

As a result of the 1940 census release and the discovery of George at Northampton State Hospital, I embarked on a months-long effort to discover the reason for George’s hospitalization.

As a result of the 1940 census release and the discovery of George at Northampton State Hospital, I embarked on a months-long effort to discover the reason for George’s hospitalization. Having learned from the archivist at the Massachusetts State Archives that the case files for the Northampton State Hospital – which officially closed in 1993 – still existed, only one obstacle stood in the way of obtaining George’s medical file: the formidable HIPAA Privacy Rule – Health Insurance Portability and Accountability Act – enacted in 1996. In a nutshell, the Act is a set of national standards for the protection of certain health information. The Northampton State Hospital as a health care provider was, per HIPAA, a “covered entity,” and George J. Osborne’s medical file, if one existed, was protected and restricted health information. A court order would be necessary to access the file.

I was able to speak with a compliance officer at the Massachusetts Department of Mental Health, the custodian of the case files, from whom I learned that a file for George J. Osborne did, in fact, exist, though no information about the contents of the file could be revealed. Not knowing why or how long George had been at the hospital, his file could have been little more than a few pages, or a summary, but the mere thought of the existence of any new nugget of Osborne family information was irresistible. (Wasn’t everyone hoping for a new nugget buried in the 1940 census?) There was no question in my mind that I had to see that file and though the idea of opening up a court case to obtain the file was intimidating, I was excited about this genealogical challenge. Soon thereafter I met with a lawyer and opened a formal probate case to have myself appointed as the personal representative of George James Osborne, thereby giving me access to his medical record.

The first step in the process was to contact all of George’s heirs-at-law – an heir by right of blood – and to obtain their written assent to my being appointed. There is something to be said for small families, and I was fortunate that the heirs-at-law numbered only nine individuals. Within two weeks of my sending each family member the appropriate paperwork, all but one had returned their assents, enthusiastically giving me their blessing. The one holdout who did not assent also did not, as required, file a written objection.

I worried that the individual’s unwillingness to cooperate, leaving me in a kind of limbo, would derail my appointment, but given that there was no property or money involved, that George had died intestate (without a will), had never married and had no family (because my grandfather and George were separated as young children, they were unaware of each other’s existence), and that the circumstances of his hospitalization could be relevant to the family’s medical history, my lawyer recommended that we proceed with the case, confident that I would be appointed. 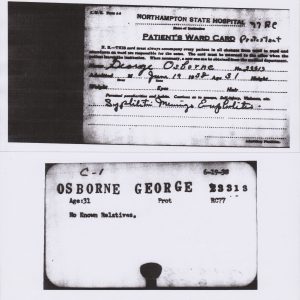 Eight months after commencing the probate case, having satisfied all the deadlines, I was appointed George’s personal representative; two months later, a thick manila envelope containing George’s Northampton State Hospital medical file arrived at my door by certified mail. It contained the heartbreaking story of George’s life and the reason why, for thirty-five years, he had been a patient at the hospital. He had arrived at the hospital in 1938, as a young man of thirty-six, with mental illness associated with stage-three syphilis with some clinical similarities to schizophrenia. As was typical of untreated syphilis, the asymptomatic stage for George had lasted for years. It was one of the most prevalent diagnoses in mental hospitals at the time.

In addition to the shocking revelation, the case file included a letter the hospital had received just after George’s admission that provided his doctors with an Osborne family history. The letter, tucked among dozens of pages documenting George’s treatment, was instrumental in providing me with yet another path for the research I was doing, directing me to another child welfare agency and a detailed file for the Osborne family.

John Donne, in observing the fundamental nature of life, wrote that “No man is an island entire to itself; every man is a piece of the continent, a part of the main.” Genealogists have their own version of that insight, encouraging us to approach our ancestors holistically, to not think of them as islands but to investigate their social unit, their extended family, their neighbors, business associates, the witnesses on their legal documents, the informants on their death certificates: in short, their continent, all who surround them and from whose own stories we might extract a new genealogical clue for a new research path. It was an approach that certainly paid off handsomely for me.