One of the biggest challenges in my family tree has been discovering information about my maternal great-grandfather, Eddie Gail. I had no information on his parents, and I don’t think he had any siblings. I knew he was a jewelry engraver in New York City and married my great-grandmother Mollie Siegel. He was an immigrant, but my family wasn’t sure which country he was from. I met him on his 100th birthday – I wish now I had asked him questions before he passed away at 102, particularly about his parents.

The first document I sought out was his petition for citizenship, which gives his original name as Anton Gailunas; he lists his place of birth as Riga, Latvia. Like many other immigrants, he changed his name to assimilate into his new community. I knew I had the right document based on the addresses he was living at and witnesses who provided affidavits (who were also family members). Anton left for America from Hull, England and arrived at the port of New Orleans on 26 April 1920 aboard the S.S. Northwestern Bridge. 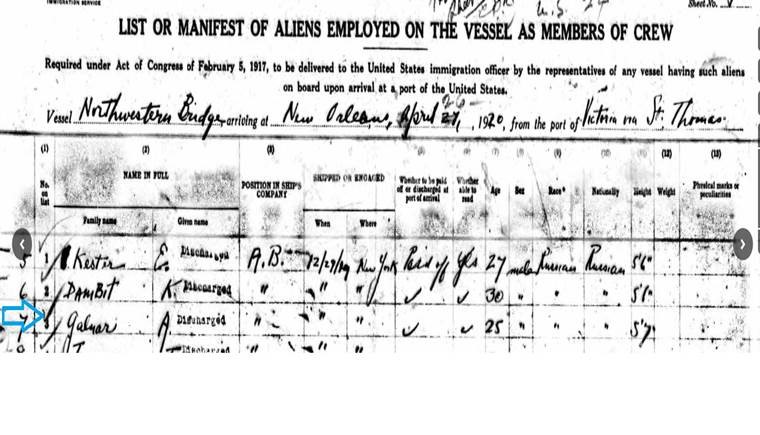 The next document I looked for was the passenger list. It took me years to locate this record, checking sites like FamilySearch, Ancestry, and Steve Morse’s web site. Nothing turned up for the ship with the arrival date. One of my colleagues suggested I check the crew lists, suggesting that perhaps he paid for his passage by working as a sailor on the ship. I checked the various collections on Ancestry and FamilySearch and eventually located the alien crew members listed on a ship manifest for the S.S. Northwestern Bridge. On the manifest was a man named “A. Golnar.” He was listed as an “A.B.”, an able seaman. He was 25 years old. He departed from New York on 29 December 1919. Nationality was noted as Russian. I believe this is my great-grandfather based on the similar name, the name of the ship, and the arrival date matching the information on his naturalization petition.

I continued researching for additional ship manifest records to see if I could find out more about his story. I came across a passenger list arrival record at New York for the S.S. Novgorod, which departed from Hull, England. Anton Gailunas is listed as 20 years old, a sailor from Lithuania. His entry was crossed out, possibly indicating he didn’t show up for the boat. The date of the arrival was 2 July 1915. I wasn’t sure if I had the correct record as he was heading towards a sailors home. This sailor’s father was listed as Ignaty Gailunas, with an address in Riga.

A few months ago I ordered a copy of my great-grandfather’s marriage license and certificate from a New York City researcher who frequents the Municipal Archives. The marriage license application is a goldmine. The bride and groom listed their parents’ names (including maiden name), country of birth, occupation, age, residence, race, and number of marriages. On the license application Anton listed his father as “Ignat” and mother’s name as “Johanna don’t remember.” Seeing the name Ignat confirmed that the man on the New York arrival record was indeed my great-grandfather.

Recently I was attending a lecture on Jewish genealogy and discussed with the teacher what I was hoping to find. He led me to the Riga address directories he saved on InternetArchive.org. The directories were searchable, so I tried entering Gailunas in the 1914 directory to see if I would find anything about the family. I located the following record, which listed a Ignat. Gailunas with the occupation of “Zollbej” (per a German translator, a “customs official”) living at the same address listed on the New York passenger list!

Genealogy is a lot like a big puzzle. All of the puzzle pieces of our ancestors have been dispersed, and as genealogists we keep finding another piece to add to their story. Sometimes a fact fits right in; at other times it doesn’t make any sense, much like trying to make a border piece fit in the middle of the picture. We may never be done finding every piece about a particular ancestor, but there is always hope to find out more. I now know my Latvian great-great-grandparents’ names and can’t wait to see what else I can uncover.