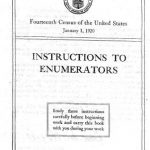 How many times have we pored over a census sheet desperately seeking our ancestors only to reluctantly conclude that the census enumerator must have missed a house? Or how often have we tried variant spellings, first name searches, and wild cards with a search engine attempting to wring a census record out of cyberspace? Well, sometimes the census enumerator really did miss dwellings and occasionally a whole block of dwellings.

The procedures for conducting each decennial census were carefully laid out in advance and may be found online. These instructions include the admonition to obtain information about missing family members from family members who were at home and information about missing families from neighbors. Enumerators were encouraged to prompt for railway workers, soldiers, sailors, and persons out of the country. In 1930 the Census Bureau initiated a procedure for the supervisor to follow-up when an entire family was missing from their usual place of residence on the day of the census. The 1940 census saw the institution of sheets 61A and 61B for collecting data on families not at home at the time of the initial visit.

A query came in to the NEHGS library not too long ago asking about an apparent hole in the Brookline, Massachusetts 1940 census. An entire block on Willard Road appeared to be missing. Fortunately, the Brookline City Directory had a street listing with the names of the occupants of each house on Willard Road. This allowed a comparison of the census results for the street to the city directory listing.

After comparing the census to the directory, one fact was abundantly clear: the census enumerator had a tough time with Willard Road.

After comparing the census to the directory, one fact was abundantly clear: the census enumerator had a tough time with Willard Road. First, the houses on Willard Road were not enumerated consecutively, which suggests that many were not at home when the census taker first knocked on the door. Second, several households appeared on sheets 61A and 61B, which were to be used only when the enumerator finally got the information after multiple attempts.

All in all, the census taker had missed ten out of 29 households (35%) on a particular stretch of Willard Road. So the next time you think your ancestor’s house is missing from the census, take a look first at all the handwritten census pages for your ancestor’s street. Then seek a city directory. With any luck the city directory will have a listing of residences on a street in addition to the usual alphabetical surname listing. You may then compare the census to the directory and ascertain what is missing.

18 thoughts on “The census taker missed”