Recently I had an opportunity to assist someone through a consultation. She was searching for the Lithuanian origins of her great-great-great-grandparents, James and Anna Wassel. The information sent to me prior to the consultation had me hitting my head against the same brick walls that she and her family had experienced, and I was getting nervous that I might not be able to offer much in the way of guidance when we met. However, the morning of the consultation, I took another look at the family and two things jumped out at me that I had overlooked previously – undoubtedly because I didn’t have all my attention on the problem (the hazard of working a genealogical reference desk).

James and Anna Wassel were found living in 1920 in Benld, Macoupin County, Illinois in the 1920 census. According to that census, both James and Anna had arrived from Lithuania in the United States in 1907. This was the first record that could be found for the family – nothing earlier in census records or, apparently, in other records.

The 1930 census indicated that couple had been married circa 1904, which would have suggested that they were married in the old country.

Without really knowing the name under which James had arrived and having not yet found the family in the 1910 census, the brick wall seemed firmly in place. If only there was a way to identify where they were living in Ohio.

It was then that I went to search for the older two children on FamilySearch.org, using minimal information. I located the Ohio, County Births, 1841-2003 database and did a search on the surname Wassell and the birth year 1910, figuring if I could find the daughter Ann being born, that would be a good county to look for the family in the 1910 census.

I repeated this process with the oldest of the children, John, who was said to be born circa 1908. Again, I used minimal information of the surname Wassel and the birth years of 1907 to 1909. And again, I was rewarded.

Son John Wassel, born 23 June 1908 in Glenwood, Guernsey County, Ohio, son of James Wassel and Anna Zinger, was shown with a delayed birth registered in 1942, listing his parents’ address as Macoupin County, based on the testimony of his parents.

Simply by stepping back a generation to the children, there was now some new information to work with in trying to find the family in the 1910 census in Ohio – the first census they would likely appear in after their arrival.

Using the son John as the search in 1910, I elected to do a search of a John with no last name included, who was born 1908 +/- 2 years in Ohio and living in Noble County, Ohio. The resulting hits supplied 39 possible families. I began to scroll through them and came upon a John Vasilewsky, born circa 1908, son of Ignetz and Anna who were living in Noble. 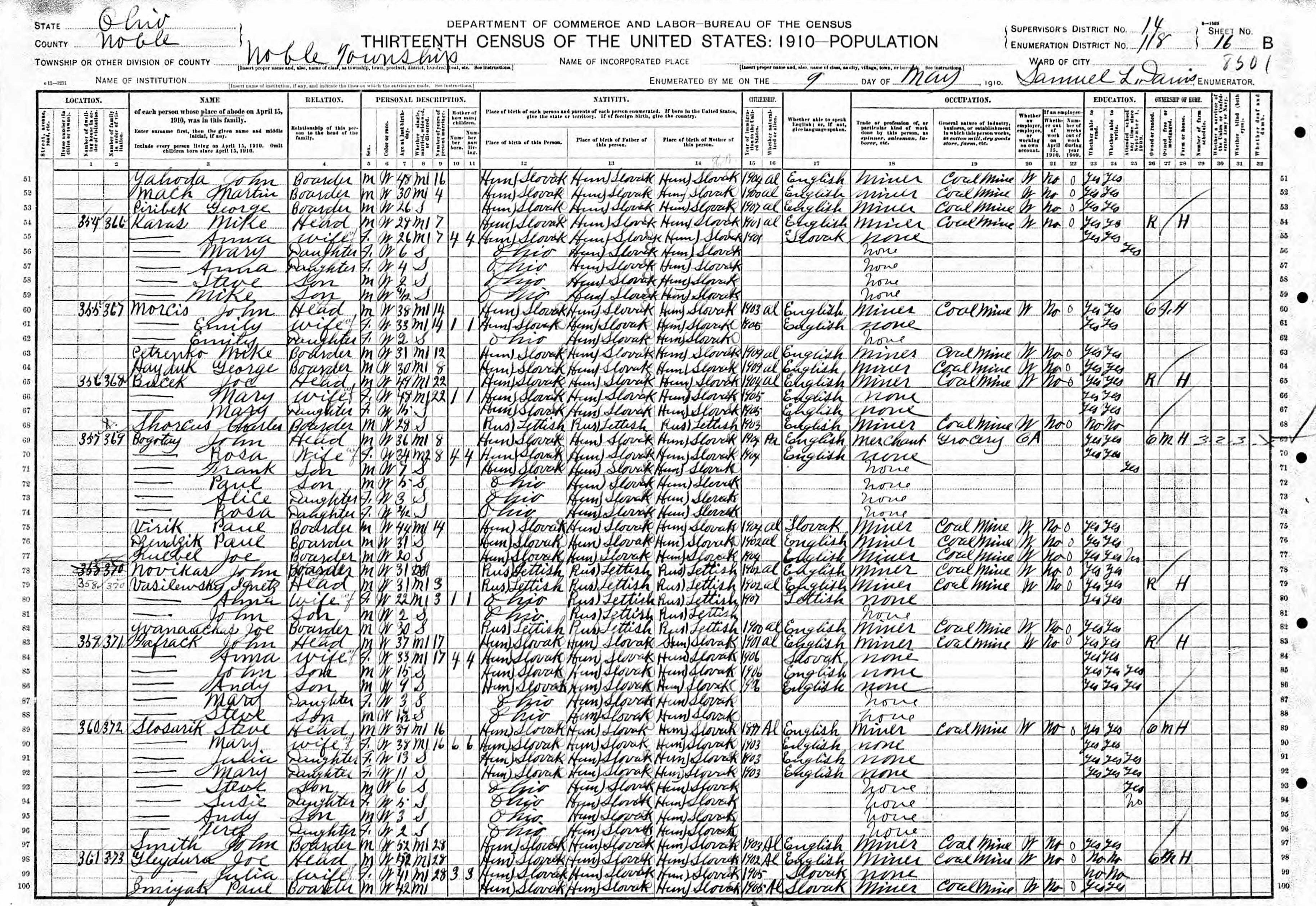 The 1910 census record for John, Ignetz, and Anna proved to be the family of James and Anna with their oldest child enumerated on 6 May 1910. Anna was a month from delivering her eldest daughter. Of interest in the 1910 census was the fact that James (aka Ignetz) and Anna were now married circa 1907 (married 3 years in 1910), were from Russia, and spoke Lettish. Additionally, James was shown arriving in 1902 and still an Alien while Anna was shown arriving in 1907.

Lettish is the language of Latvia. Latvia is just north of Lithuania, and both are part of the Baltic States. Lithuania gained independence 16 February 1918;  Latvia followed 18 November 1918. This could explain why in 1920 the family was now associated with Lithuania, though they may have lived on the border of what became the two independent countries.

Armed with the possible name for James on arrival, a search of the passenger lists was again undertaken.

Armed with the possible name for James on arrival, a search of the passenger lists was again undertaken. The first search, on Ancestry.com, took advantage of wildcards using Ign* for the given name and Vas*sk* for the last name, coupled with a birth of 1878 +/- 2 years and an arrival of 1904 +/- 2 years. This turned up absolutely nothing.

The interchangeability of V and W was considered and a new search with all the same parameters except changing the last name to Was*sk* was then used. There were two men who showed up. While it certainly needs more research, the best candidate of these two was an Ignatz Waschilefski who was going to Pittsburgh, Pennsylvania. The 26-year-old single laborer, whose last residence was listed as something like Krusenieki/Krusenicki, arrived in May 1903 to live with his cousin H. Anus Kiewicz. Pittsburgh is across the river from Ohio, where the family ultimately settled. Also, Ignatz was a “laborer” and James ends up working in the coal mines. He could have begun that work in Pittsburgh.

The other candidate was dismissed for two reasons. He was a skilled worker – a shoemaker – and he was going to New Jersey, which was not as promising a locale, though it was recommended that both men should be pursued.

By looking back one generation and then using that generation to locate the family in 1910, we opened up new opportunities for potential immigrants and supplied variant information that could prove most useful. Locating James’ naturalization records was also suggested, looking at Illinois’ IRAD depositories now that the 1910 census told a different story of his potential naturalization.

11 thoughts on “Generations and geography”