I have a ghost standing at my shoulder, pointing a skeletal finger at my family history “to do” list to remind me of my deficiencies. This ghost arrives at year’s end when The Weekly Genealogist arrives with a survey asking if I’ve completed my genealogical goals, and then asking what my goals are for the coming year. 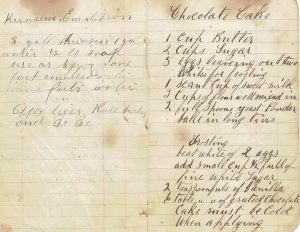 To be sure, I have “failed” to complete several (okay, most) of the items on my list. For instance, Son spent hours putting together two archival albums of old family photos, newspaper clippings, and other fragile documents. Epiphany and Revelation hit me as I was identifying for him the people in those photos and the subjects of the newspaper articles. He didn’t know who they were, and I really need to create the identification index for the albums, a very important project for perhaps the only person in the family who can identify the photos. I suppose the ten days I spent baking my annual All Things Cookie Overload instead of creating that index might not be as important, but some of the cookie recipients are the guys who plow and sand my driveway, and the cookies make them (and my quality control husband) happy. Enough said!

I have yet to obtain the exact date of death of my paternal great-grandmother, Ellen Francis “Nellie” (Cony) (Church) Hayward. All that task requires is a quick visit to the vital records office here, a visit I can’t seem to schedule. I also “failed” to find the parents of my umpteenth great-grandfather James Howard – or maybe he was a George whose father might or might not have been Robert or William – whose ancestor might or might not have been St. Philip Howard. I’m not sure it matters: such parentage won’t win me a hall pass to the Vatican anyway.

[We] found the full story of my grandfather’s barn burning, as well as the details of my paternal uncle’s illness and death, details which were never discussed by the family.

However, I prefer to turn any negative to a positive, so I will point out to the ghost that, with the help of Son, we found the full story of my grandfather’s barn burning, as well as the details of my paternal uncle’s illness and death, details which were never discussed by the family. Those details gave us more perspective to the impact of that illness and death on his family and the following generations.

We also found more information about my paternal grandfather’s World War I military service, and answered my question of “Why is he in uniform in this photo? He never went anywhere!” All that was prompted by finding some fascinating 1918, 1919, and 1920 issues of a newspaper, the Illustrated Weekly, which offered pages of photos, sometimes graphic, of the conflict.

I don’t agree that these incomplete tasks are “failures,” because I haven’t given up on them, so I’ll just add them to this year’s “to do” list. This Ghost of Failures Past will then become the Angel of Successes Yet to Come. That’s my story, and I’m sticking to it!

9 thoughts on “The Ghost of Failures Past”