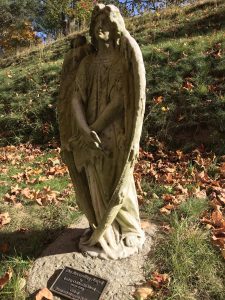 Here in my hometown we are blessed with an exquisite landmark building, the 1681 meetinghouse known as Old Ship Church, whose name may have been inspired by the building’s vaulted roof, resembling a ship’s hull, built of oak timbers. Used originally as a gathering place for both civic discussion and religious worship it is, today, the oldest church structure in the United States in continuous use. Behind the meetinghouse is the town’s oldest cemetery, whose earliest burials pre-date construction of the meetinghouse. Sometimes called the First Settlers graveyard, it is the final resting place of the families who founded Hingham – Cushing, Lincoln, Thaxter, Beal, Hobart – their descendants, and other prominent residents – including two Massachusetts governors. It is one of the few historic cemeteries where burials are still taking place.[1]

In 1838, during the rural garden cemetery movement when colonial burial grounds – those stark reminders of one’s mortality – were being transformed into parks and arboreta, the First Settlers graveyard was incorporated as Hingham Cemetery. Taking its landscape design inspiration from the Mount Auburn Cemetery in Cambridge, Massachusetts, the former cow pasture scattered with ancient slate tombstones was renewed, sculpted, and terraced, planted with specimen trees, crisscrossed with roads and walking paths, and accented with elaborate monuments and works of art. From neglected and sorrowful, Hingham Cemetery became a green oasis, as much a destination for leisurely walks and picnics as it was a final resting place.

These days one will find as many (maybe more) people pushing baby strollers and walking dogs as one will find visiting the grave of a loved one. Not long ago, on a clear, crisp fall afternoon when the sugar maples were aflame, I found myself among them, wandering the paths after having visited a family plot that I will write about in a future post. Craning my neck to take in the full expanse of the peaceful landscape I saw, poised at the edge of one of the terraced hills, a beautifully sculpted angel who seemed to be watching my every move. As I scrambled up the hill for a closer look, something about her seemed familiar. I had once written about an angel, sculpted of snow by a budding young Vermont artist named Larkin Goldsmith Mead Jr. and, indeed, here she was, a replica of Mead’s Recording Angel.

From neglected and sorrowful, Hingham Cemetery became a green oasis, as much a destination for leisurely walks and picnics as it was a final resting place.

If I might digress, momentarily, Larkin Goldsmith Mead’s family ties may be as notable, genealogically speaking, as his sculpted works. Born in Chesterfield, New Hampshire in 1835 to Larkin Goldsmith Mead (1795–1869), a prominent attorney, and Mary Jane Noyes (1805–1875), a sister of John Humphrey Noyes (1811–1886), the utopian socialist who founded the Oneida Community (1847–81), young Larkin was the brother of William Rutherford Mead (1846–1928), one of the founding partners of the prominent Beaux-Arts architectural firm of McKim, Mead, and White, whose projects included the Brooklyn Museum, Columbia University, and the Boston Public Library. William Rutherford Mead was named for his mother’s cousin, the future 19th American president, Rutherford B. Hayes. Larkin’s sister, Elinor (1837–1910), married the novelist, critic, and editor William Dean Howells (1837–1920), who also served as the U.S. consul in Venice. She designed the William Dean Howells House in Cambridge, now a private residence listed on the National Register of Historic Places.

As for his artistry, Larkin Mead’s destiny and good fortune began to take shape on the morning of New Year’s Day in 1857, when early risers in Brattleboro, Vermont, where Mead had relocated to work as a clerk, were held spellbound by a graceful figure, delicately contoured with folded wings and a flowing robe. She had appeared, divinely it seemed, overnight at the town’s crossroads, startling some by her sublime countenance and quickly becoming the talk of the town. Glazed with melted snow that had frozen in the bitter overnight cold, thus giving the statue the appearance of Italian marble, Mead’s eight-foot tall figure shimmered in the morning light. He had labored all night, by lantern light, assisted by two young friends, to perfect his creation.

Holding her stylus and clutching an open ledger, Mead’s snow sculpture represented the Recording Angel called upon by God to keep an account of the year’s events and an individual’s deeds and misdeeds for future reward … or punishment. Protected from melting by the cold weather, the angel stood intact – one account said by the sanctity of genius – for nearly two weeks, earning Mead national attention and instant fame as newspapers spread the story. Brattleboro writer Arthur H. Goodenough (1871–1936) celebrated the event in his poem, The Angel of the Snow:[2]

From far and wide the people

Came thronging to the place,

And wonder and amazement

Is stamped on every face.

Poet and critic James Russell Lowell contemplated Mead’s angel in his literary essay, “A Good Word for Winter” – his ode to the season and to snow – by observing “It was a pretty fancy of the young Vermont sculptor to make his first essay in this evanescent material.”[3]

Prestigious commissions followed the Recording Angel, and after spending time working for Harper’s Weekly as an illustrator at the front during the Civil War, Mead traveled to Italy, first to Venice, where he married an Italian beauty in 1866, and then to Florence. After a brief return to America, he settled permanently in Florence, where he lived until his death in 1910. Among the many commissions he completed was the design for Lincoln’s Tomb and sculptures for the Vermont Statehouse and the United States Capitol, where his statue of Ethan Allan (1876), founder of Vermont, stands in Statuary Hall.

In the 1880s, Mead accepted a number of commissions for marble copies of his Recording Angel, one of which was originally presented to the Unitarian Society of Brattleboro and is now on view at the Brooks Memorial Library in Brattleboro. Another adorns his grave in Florence. Several smaller replicas were also made, including the marble that graces the Hingham Cemetery, a gift from a longtime Hingham resident, Davis Stuart DeBard (1915–2010), to whom it had been passed down through the generations – though, unfortunately, the hands through which it passed have been lost to history.

In his essay celebrating Mead’s creation and alluding to his later success, Lowell went on to say, “Was it a figure of Youth, I wonder? Would it not be well if all artists could begin in stuff as perishable, to melt away when the sun of prosperity began to shine, and leave nothing behind but the gain of practiced hands?”

It seems an apt sentiment in these waning days of the old year as we contemplate new beginnings, hopeful that regrets and missteps might melt away in the shine of the New Year, that we might sculpt the future with the benefit of experience and hindsight.

A happy and prosperous New Year to all.

4 thoughts on “Touched by an angel”