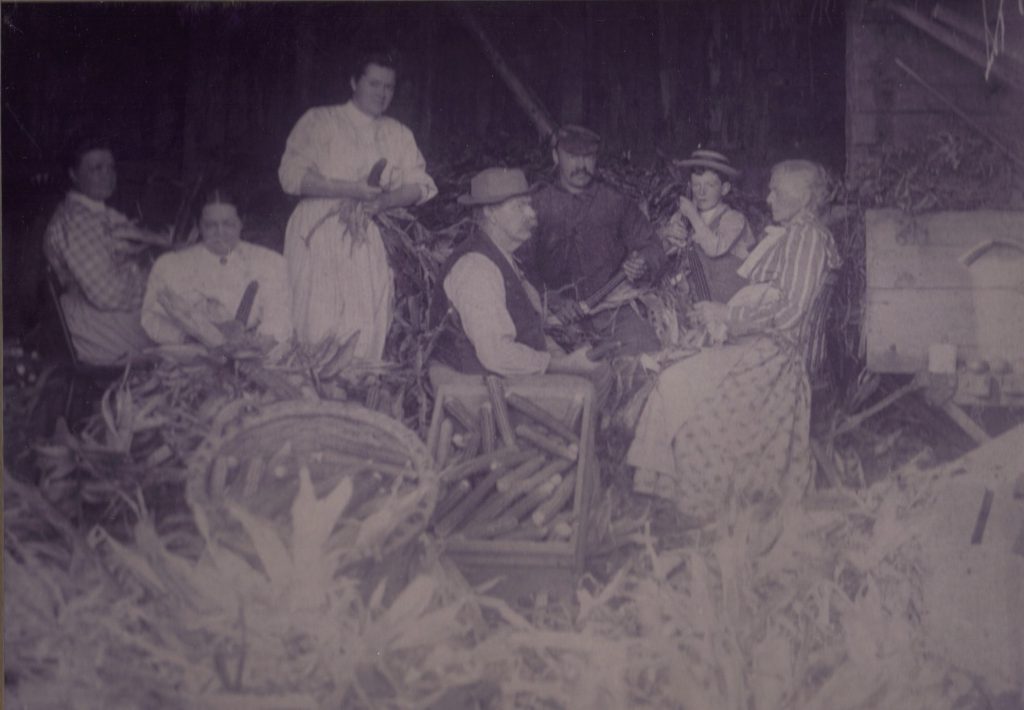 Marcia Bradford was a stern, no-nonsense kind of woman. At least, that’s what I’ve heard. Look at that face. I wouldn’t have crossed her…

Here she is shucking corn (far right) and looking like Whistler’s Mother.

Here she is shucking a baby: 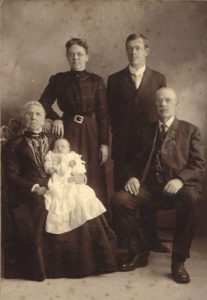 Marcia was born 21 February 1820, in Turner, Maine, to Ephraim Bradford and Lovisa Dawes. Her grandfather, Wait Bradford, moved the family there from Kingston, Massachusetts, shortly after the Revolutionary War. In Turner, Marcia was surrounded by an extended network of relatives. Many of the town’s earliest families were from Plymouth County, Massachusetts, and they seem to have kept close contact with their kin back home. Some, like Marcia, even returned to the Kingston area in adulthood, choosing their parents’ or grandparents’ hometown over their own. It was there, in 1842, that Marcia married Peter West McLauthlen as her first husband. Their children went on to found successful tack manufacturing and cranberry harvesting businesses around the South Shore of Massachusetts. You know, real nineteenth- and early-twentieth-century stuff.

Some, like Marcia, even returned to the Kingston area in adulthood, choosing their parents’ or grandparents’ hometown over their own.

The historical record tells little of Marcia’s adolescence, but there is one family story that, if true, could flesh out some of the details from this period of her life:

Marcia hated being up in Turner. I don’t know why, but it’s fun to speculate. Maybe it was the frontier setting, the economic pressures of the short Maine growing season, or a difficult home life. In any event, she wanted out. So one night, as the story goes, Marcia ran off with one of her father’s horses, riding through the night until she reached Kingston. It’s difficult to determine when exactly this midnight ride took place except that it was before her marriage. She must have been in her late teens or early twenties, which sets the story in the late 1830s.

Like a game of telephone across the generations, I suspected the story had morphed quite a bit from the reality. I did some digging (think creative Google searching, not intense research) to assess whether it was possible.

From Turner, Maine, to Kingston, Massachusetts, is about 200 miles, and much too far for Grandma Capen to have made the journey in one night. Maybe the pair made it to Portland, about 50 miles south of Turner, with Marcia expertly managing the horse between a walk and a trot. From there, the journey would have been easier, aided by a system of turnpikes and roads connecting Portland to Portsmouth, Portsmouth to Boston, and finally Boston to Kingston.

Even so, the journey would have taken at least four or five days. I wonder, too, if Marcia didn’t run off with some money, because she would have needed it for lodging and to feed herself and her horse. An obvious question, raised by the geography of Marcia’s coastal route, is why she wouldn’t have taken a ship from Portland to Boston, then Boston to Kingston. Maybe she did, but the details were dropped from the story. Better yet, she knew the story of a horse ride would ensure her legacy five generations down the road.

Whether the story is true or not makes little difference. Its value lies in the way that it has shaped my understanding of my long-ago ancestor. When you are left with little more than a few pictures and an array of vital records, you concoct personality where you can. Seeing the conviction that rests in Grandma Capen’s scowl, I am convinced that she made the entire trip – in one night – atop a bionic horse.

7 thoughts on “A flair for the dramatic”