In my post earlier this year, regarding preliminary research into the future Duchess of Sussex’s matrilineal ancestry, I indicated that I had ordered several additional twentieth-century records that might lead to corrections or additions. Fortunately, none of the new records seriously affect the lineage I presented, but obtaining one record was not so straightforward.

The first record I received was the death certificate of Meghan Markle’s grandmother Jeanette Johnson, which I received from the Fresno County recorder. This record stated that she died in the City of Fresno, which was her residence according to the Social Security Death Index. She was divorced at the time of her death (name of former spouse not given), with the informant being Jeanette’s son Joseph Johnson of Fresno. Her mother is listed as Nettie Arnold, and her father as unknown.

The other California death certificate I ordered was for Jeanette’s mother (and Meghan’s great-grandmother) Nettie Mae Pritchard. According to the California Death Index, Nettie died in Los Angeles County on 4 December 1980. However, according to the “certificate of search” I received (above) from the Los Angeles County Registrar-Recorder/County Clerk, no such name appears in their indexes.

I wrote to the State of California Department of Public Health for same exact record and received the certificate below.

Obviously, the record existed. Nettie died in the City of Los Angeles on 4 December 1980. While the California Death Index listed Nettie as “Nettie Mae Pritchard,” you can see the complete name listed on the death certificate is “Nettie Mae Pritchard aka Arnold.” My application to the Los Angeles County Clerk for Nettie’s death certificate provided additional information, including her full date of death, but my guess is that at the local level Nettie was indexed under Arnold instead of Pritchard. There goes my twenty-one dollars.

It’s always frustrating when being told by a records repository that a record does not exist when you know it’s there. I’ve had more than one case where I have received records that are “transcriptions” stating incorrect or less than complete information.

Years ago, I needed a certified copy of my grandmother’s birth record (she was born in Springfield, Massachusetts in 1914). While now I could find a digital copy of her birth on AmericanAncestors.org, at this time the record was still only kept at the city and state level. I requested the record from the Bureau of Vital Records in Boston, where an official transcribed the record from the microfilm. As I was about to leave the  office, I noticed the record gave her birth as December when I knew that my grandmother was born in September! I told the official, the error was acknowledged, and I received a new (and correct) transcription. What if I didn’t spot the error and had just gone home? 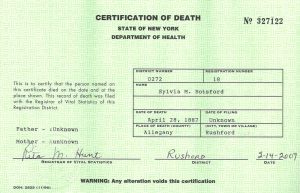 You can see the problem: the deceased is listed as Sylvia.

You can see the problem: the deceased is listed as Sylvia. Also, while I was requesting this record by mail in 2009, I had visited the Rushford clerk’s office seven years earlier and knew the death record gave more information, including her exact age at death. After I called the clerk, I received the below “complete” transcription. 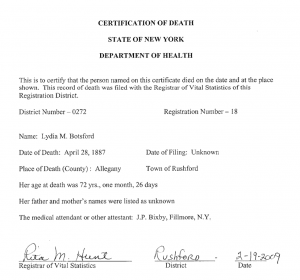 Many states and localities only allow the physical viewing of recent records by the clerks themselves. This can make it tricky to prove something is wrong when you suspect an incorrect transcription or you’re told there is no record. All in all, if you think that something a keeper of records told you is incorrect, see if you can get a second opinion!