After tracing your family line as far back as possible, you have run into the inevitable brick wall. You should: (a) persevere in your research and hope for an eventual breakthrough; (b) claim that you are a direct lineal descendant of Alexander the Great or King Arthur, acknowledging that your evidence is open to differing interpretations; or (c) give up and accept your failure as a genealogist.

ANSWER: (a), unless you’re like 27 percent of the amateur genealogists posting family trees on the internet, in which case the correct answer is (b). END_OF_DOCUMENT_TOKEN_TO_BE_REPLACED

Census records are obviously an essential resource for genealogical research. Until recently, my understanding was that the first U.S. census to provide a place of origin was the 1850 census. Beginning in 1850, the census began to include the names of all family members, ages, and place of birth, among other information. This contrasted with earlier census records that only provided the name of head of household and a broad age range for each family member.  However, while doing some recent case work on a Snow line in Hancock County, Maine around 1800, I came across an article by Walter Goodwin Davis published in The New England Historical and Genealogical Register in 1951. In this article, entitled “Part of Hancock County, Maine in 1800,” Davis called attention to the 1800 census for Hancock and Kennebec Counties (at that time part of Massachusetts) which actually had a column labeled, “from whence emigrated.”[1] END_OF_DOCUMENT_TOKEN_TO_BE_REPLACED

So it was something of a surprise one summer’s day, out sailing with my father and a friend, for my father to point out a house overlooking the Atlantic Ocean as belonging to “our kooky cousin the Countess.” Even as a child, a keen reader of histories and romances, the word Countess – applied to a resident of Essex County, Massachusetts – piqued my interest; and I was still of an age where adult foibles (particularly those noticed by other grown-ups) were fascinating glimpses into adult life. END_OF_DOCUMENT_TOKEN_TO_BE_REPLACED

At the core of this treasure trove was the Essex Institute in Salem, which between 1859 and 1993 published 130 volumes of the Essex Institute Historical Collections [EIHC] – but the material in each volume varies widely from issue to issue resulting in information from the same record sets being spread among many years of issues. END_OF_DOCUMENT_TOKEN_TO_BE_REPLACED 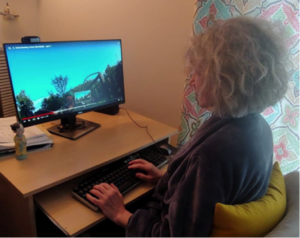 After working directly with physical collections in the library for more than twenty years, when we began telecommuting due to COVID-19 I could not even imagine how to do it from home or what work would be best to do. My position is with the Library Collection Services team, and some of my at-home work is indeed related to library collections, but my knowledge of Russian and Ukrainian has allowed me to be helpful to other areas of NEHGS as well. Occasionally over the years I have translated some records for genealogists, but now I do translation daily and work on several documents at once, such as Hebrew Immigrant Aid Society documents for the Wyner Family Jewish Heritage Center (JHC), guides and brochures for the Education team and JHC, and descriptions of the art objects on display in our building – and more documents are on the way.   END_OF_DOCUMENT_TOKEN_TO_BE_REPLACED 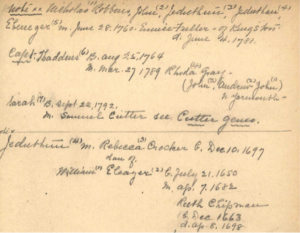 Do you want to use the resources of the American Ancestors and NEHGS Library from home? The Library’s Collection Services team is working hard to bring our collections to you. How are we doing this? We are adding links daily in our library catalog to digital copies of materials, we are enhancing records with more information and subject headings to make searching for your family more effective, and we are preparing digital versions of unique library holdings to add to our Digital Library. There are now close to 15,000 links to digital versions of items that you can access. These links exist thanks to the efforts of the staff and our dedicated volunteers who assist us with this task and help you use the library from home. END_OF_DOCUMENT_TOKEN_TO_BE_REPLACED

Lemuel Shattuck founded the New England Historic Genealogical Society in 1845 with four of his Boston friends: Charles Ewer, Samuel Gardner Drake, John Wingate Thornton, and William Henry Montague.[1] The new society was incorporated for the “purpose of collecting and preserving the Genealogy and History of early New England families.”[2] In addition, the society solicited donations of books, family registers, Bible records, and newspapers and manuscripts related to the goals of the organization to be preserved at its headquarters in Boston. The Society received approval for incorporation on 18 March 1845 from the General Court of Massachusetts.[3] END_OF_DOCUMENT_TOKEN_TO_BE_REPLACED

My great-grandfather was born in Wisconsin in 1901, just about a year after his parents and older sisters immigrated from Norway. His father, a sailor who was once “honored by the King of Norway,” settled the family on the shores of Lake Michigan and began a long career with the U.S. Life Saving Service, which became the U.S. Coast Guard in 1915. Though this man, my great-great-grandfather Søren “Sam” Carlsen, died in 1955, long before I was born, he has always been a central figure in the family lore. His portrait is displayed proudly and prominently at my grandpa’s house, and many of my grandpa’s childhood stories feature “Grampa Carlsen” swooping in to save the day. END_OF_DOCUMENT_TOKEN_TO_BE_REPLACED

New Hampshire has a special place in my heart. My friends and I camp in the White Mountains every summer and each year we find something new to visit. One summer, we made it up Mount Washington. Everyone in New England knows the “This Car Climbed Mt. Washington” bumper stickers. But do people know enough about Mount Washington’s history? It’s full of human perseverance, courage, and innovation. Its main claim to fame is that on the summit in 1934, the highest wind speed ever was recorded. The record was held till 1996, but it is still the highest wind speed recorded that is not associated with a tornado or a cyclone. END_OF_DOCUMENT_TOKEN_TO_BE_REPLACED

As I said in Family Treasures: View from the index, Curator of Special Collections Curt DiCamillo, Publications Design Manager Ellen Maxwell, and I recently finished work on a beautifully illustrated book called Family Treasures: 175 Years of Collecting Art and Furniture at the New England Historic Genealogical Society. For me and Ellen, the experience was a nice change from the 60+ text-heavy genealogical resources and compiled family histories we have produced in our four years at NEHGS. We enjoyed learning from our author Gerry Ward and our colleague Curt, who brought their combined experience in producing fine art books and museum catalogs to the project. END_OF_DOCUMENT_TOKEN_TO_BE_REPLACED