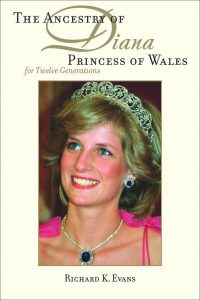 While working on the various connections of the Livingston family in Scotland, I had a vague recollection that I had encountered multiple Livingstons in the ancestry of the late Diana, Princess of Wales; several years ago I edited a book on her forebears,[1] and I pictured several lines from which to choose. The same, in a sense, must be true for the Prince of Wales, whose ancestry was covered so fully in Gerald Paget’s 1977 work.[2]

Well, yes and no. I suspect the name I sought was the Saltonstall family in the Princess’s ancestry – a family about whom I have written a book![3] The Saltonstalls appear with some frequency in The Ancestry of Diana, Princess of Wales, as we were careful to note the families in her ancestry with American connections. END_OF_DOCUMENT_TOKEN_TO_BE_REPLACED

As I work at reconstructing the environment in which the Livingstons of the sixteenth and seventeenth centuries lived, I have been struck by the frequency with which I have encountered members of the Menteith family. (It is fair to say that there are a number of such families in this project, interrelated in various ways, but the Menteiths keep turning up!) To arrive at the early modern Livingston family, I have gone back on various lines (including the ancestry of Livingston spouses), so the resulting family trees cover individuals who were not named Livingston – or aware of these particular connections. END_OF_DOCUMENT_TOKEN_TO_BE_REPLACED

As I continue to map out the connections of the Livingston family of Callendar, Stirlingshire, I am struck by how comparatively closely related the sixteenth-century Livingston family was to two of the husbands of Mary, Queen of Scots. A third connection, rather less salubrious, was to some of the murderers of David Rizzio, or Riccio, which occurred in the presence of the Queen while pregnant with the future King James VI. (Rizzio was accused by his assailants of being the child’s father.) END_OF_DOCUMENT_TOKEN_TO_BE_REPLACED

In reviewing some late fourteenth- and early fifteenth-century marriages in the Livingston family in Scotland, I was struck by a pair of alliances that must have been important to the Livingstons of that era. This review also underlined my impression that the records of that period – and the later accounts based on those records – can be a challenge, since all too often the compilers shrug and offer “(?) daughter of ______ Somebody of Somewhere” by way of identification. END_OF_DOCUMENT_TOKEN_TO_BE_REPLACED

Another story of a person “claiming” the British throne appeared in the news recently. While years ago I wrote about a silly claim of an American going back centuries allegedly to the Welsh throne, this story is much more immediate to the current royal family.

In summary, Francois Graftieaux, 73, claims his father Pierre-Edouard Graftieaux, born in 1916, was the result of an affair with the then-Prince of Wales (later King Edward VIII) and a French seamstress. The suit claims that, “In the 1900s, the true line of succession was unlawfully concealed to block the Graftieauxs from their place in history. Whilst my father and I would have no direct claim to the throne on account of Edward’s abdication…” END_OF_DOCUMENT_TOKEN_TO_BE_REPLACED

Last week, I put together several charts relating to newly appointed U.K. Prime Minister Boris Johnson. These charts were based on the research of Gary Boyd Roberts, and I had assisted him on some of Boris’s Pennsylvania and Connecticut ancestry, which resulted in five charts showing distant kinships to ten U.S. Presidents.

The sixth chart was perhaps the most complicated. As was previously reported, and included in Gary’s The Royal Descendants of 900 Immigrants (RD900), Boris Johnson’s father is a descendant of King George II through the older sister of King George III. In researching the New England ancestry behind Boris’s mother, Gary found a descent from Mrs. Elizabeth Alsop Baldwin of Milford, Connecticut, who descends from King Edward I of England.