Applying to a lineage society can be a complicated process, especially if you are applying under a new ancestor or an ancestor with known problems in their lineage. Receiving a rejection letter after submitting such a lineage can make the process feel frustrating if you know the line is right. Sometimes the society will see problems that the applicant does not, or they know that with just the right piece of evidence the line would be acceptable without a problem. A rejection, however, is not always an insurmountable loss. Sometimes, if you look at the sources in question and do some diligent research, you can convince the lineage society that they are mistaken and have your application accepted. END_OF_DOCUMENT_TOKEN_TO_BE_REPLACED 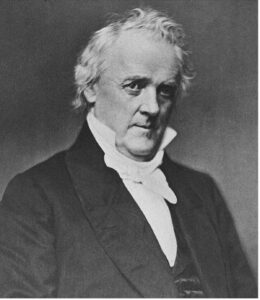 I recently gave a talk to the Colorado Sons of the American Revolution (my first in-person lecture in over two years, and first time in Colorado!). My talk was on the ancestors of American presidents, 1789-2022, and specifically spoke to which presidents have joined, or could have joined, the S.A.R., while also noting that several presidents lived before the organization was founded in 1889. A Pittsburgh chapter of the S.A.R. had a page showing the sixteen presidents who were members of S.A.R. themselves, from Rutherford B. Hayes through George W. Bush. (The page also shows Grant, who died before the S.A.R. was founded but was a member of a parent organization, the Sons of Revolutionary War Sires.) END_OF_DOCUMENT_TOKEN_TO_BE_REPLACED

“He was not a very tall man”: words I read in a message associated with my great-great-great-grandfather Henry Poor of Newburyport, Massachusetts. Henry was born in Newbury on 20 June 1769, a son of Captain Jonathan and Sarah (Dole) Poor. His father led a company of the 2nd Essex Regiment on the Alarm of 19 April 1775 and served at various times during the war. I often wondered what young Henry knew about his father’s service that was lost in our family traditions. END_OF_DOCUMENT_TOKEN_TO_BE_REPLACED

Proof that fears and concerns still prevail six months after the country was plunged into lockdown, isolation and quarantine could be found in the empty streets of Plymouth on the day that eager Mayflower descendants and philatelists should have been lining up for the first day issue of the long-awaited Mayflower in Plymouth Harbor stamp. All the empty parking spaces along the main thoroughfares were the first clue that the event, like so many others, had been scratched from calendars. But not mine. END_OF_DOCUMENT_TOKEN_TO_BE_REPLACED

In my last post (in a footnote), I gave a summary of presidents with Mayflower ancestry. Readers called attention to the fact that some of the presidents were grouped by descent from a male passenger, while in some of these groupings the male passenger’s wife was also a passenger. The footnote was meant to be brief, and referred to pages in Ancestors of American Presidents, which had more specific information (including all passengers, female and male, within a family from which each president descended).

While I was not specifically leaving out female passengers (other Mayflower passengers who were themselves children of named passengers were also omitted), the comments clearly spoke to the often “male-preferred” nature of how genealogies are frequently summarized, leaving out or minimizing female ancestors. END_OF_DOCUMENT_TOKEN_TO_BE_REPLACED

Her descendants knew almost nothing of this when I was growing up, perhaps because of that break occasioned by Theodora’s father’s death in 1887 and her mother’s death in 1895, when she was fourteen. END_OF_DOCUMENT_TOKEN_TO_BE_REPLACED

The Committee is chaired by Ryan Woods, Executive Vice President and COO at NEHGS. Woods follows in the footsteps of his kinsman, Henry Ernest Woods, who was chairman of the Committee on Heraldry from 1890 to 1911. Today, the committee of twelve meets three to four times yearly, and is charged with reviewing applications and registrations of coats of arms for Americans. These include both historical and modern coats of arms. END_OF_DOCUMENT_TOKEN_TO_BE_REPLACED 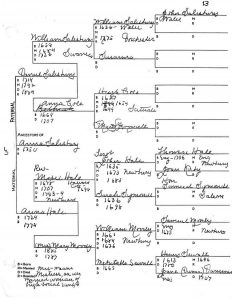 Following up on correcting the charts in my Seeing double blog post, the chart showing my ancestor Anna (Salisbury) Slade was a recent disappointment and involved removing some ancestors from my charts. The chart identified Anna’s parents as Daniel Salisbury and Anna Hale, and had Anna as the child of Rev. Moses Hale (Harvard 1699) and Mary Moody of Newbury, with several early Newbury ancestors including Henry and Jane (Dummer) Sewall, who were the parents of Judge Samuel Sewall (1652–1730), known for his involvement in the Salem witch trials. END_OF_DOCUMENT_TOKEN_TO_BE_REPLACED

Applicants to the Society of the Descendants of the Colonial Clergy (SDCC) must have “a proven lineal lawful descent from a clergyman who was regularly ordained, installed, or settled over a Christian church within the limits of the thirteen colonies prior to 4 July 1776.” Although not a descendant of a colonial clergy ancestor, I was invited to attend the SDCC business meeting on Saturday, 4 November 2017, because I was a speaker during their annual meeting luncheon. END_OF_DOCUMENT_TOKEN_TO_BE_REPLACED

Back in April I attended the biennial conference of the New England Regional Genealogical Consortium (NERGC) in Springfield, Massachusetts. Knowing that I had ancestors who lived in Springfield, I was excited about what I might find at the local repositories. I was not disappointed.