Growing up in a suburb outside San Francisco, my family vacationed in Lake Tahoe every summer.  I remember driving by Donner Lake and driving over Donner Pass. I believe I was about eight years old when my mom gave me the book Patty Reed’s Doll, which I still have today. The book details the experience of the Donner Party getting snowbound at Donner Lake. I became fascinated by the story. It wasn’t long before I was reading everything I could get my hands on about them, another fact that continues today. END_OF_DOCUMENT_TOKEN_TO_BE_REPLACED

If you have ever tried to track down distant cousins, especially in foreign countries, you know how difficult it can be, and that you will have to be resourceful. I’ve used different approaches in different circumstances in Ireland and Italy, and sometimes succeeded. But occasionally sheer serendipity works its magic. This account is particularly touching for me because I met my elderly Italian cousin unexpectedly, thanks to a confluence of fortuitous circumstances, as I neared the end of an unproductive week seeking cousins in southern Italy. But this happy-ending story also holds some tips and lessons that may help you as well. END_OF_DOCUMENT_TOKEN_TO_BE_REPLACED 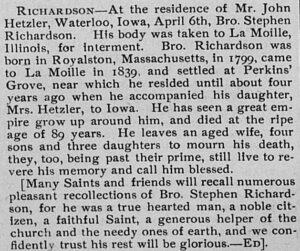 When I have given lectures and consultations on migrations into and out of New England, a frequent topic of discussion regards the question of whether the migration was religiously or economically motivated. For the period of The Great Migration into New England from 1620-1640, the settlements by the English Separatists and Puritans were overwhelmingly religious (not for religious freedom, but to practice their religion the way as they wanted). Several “second-generation” settlements like Hartford and New Haven, Connecticut, and even migrations out of New England to Dorchester, South Carolina, were also religiously motivated, following a minister to a new town. By the mid-eighteenth and early nineteenth century, migrations out of New England were largely economically motivated for cheaper land and other factors. Still, occasionally a religiously motivated migration occurs, and sometimes they are at first difficult to spot. END_OF_DOCUMENT_TOKEN_TO_BE_REPLACED