Last summer, our staff outing was to nearby Castle Hill – obviously this summer we were unable to do any such outing. This property was purchased in 1910 by Richard Teller Crane, Jr. (1873-1931), president of the Chicago-based Crane Co. (manufacturer of plumbing supplies and other goods), which he had inherited from his father. The fifty-nine room summer “Great House” that stands there today was completed in 1928. The private beach and surrounding land was donated to the Trustees by Richard’s widow Florence (Higinbotham) Crane after his death, with the remaining property, including the mansion, following after her death in 1949.

On our summer outing last year, we split into three groups, and our tour guide had a vast knowledge of the mansion and property, despite only working there for the summer. He gave a very intimate summary of how the summer lives were for Richard and Florence, and for their two children – daughter Florence and son Cornelius Vanderbilt Crane (1905-1962), later an explorer and philanthropist. Cornelius married opera singer and divorcee Cathalane Isabella (Parker) Browning in 1929, and adopted her daughter Cathalene Parker Browning. While the couple divorced in 1940, and Cornelius disinherited his adopted daughter, she named her son in his honor: Cornelius Crane “Chevy” Chase.[1]

The ancestry of the Cranes goes back to numerous families in New England that I have worked on before, but one connection caught me by surprise. Florence’s paternal grandfather, Henry Dumont Higinbotham (1806-1865), is profiled and pictured in an 1878 history of Will County, Illinois. The entry begins:

I’ve made several posts here on the Lippitt family, a family history I am compiling that is near completion, including a recent post about addressing queries from the copy editor. In searching the manuscript now for Higinbotham or Higginbotham, I found “Miss Lippit, of Providence” under the following family: 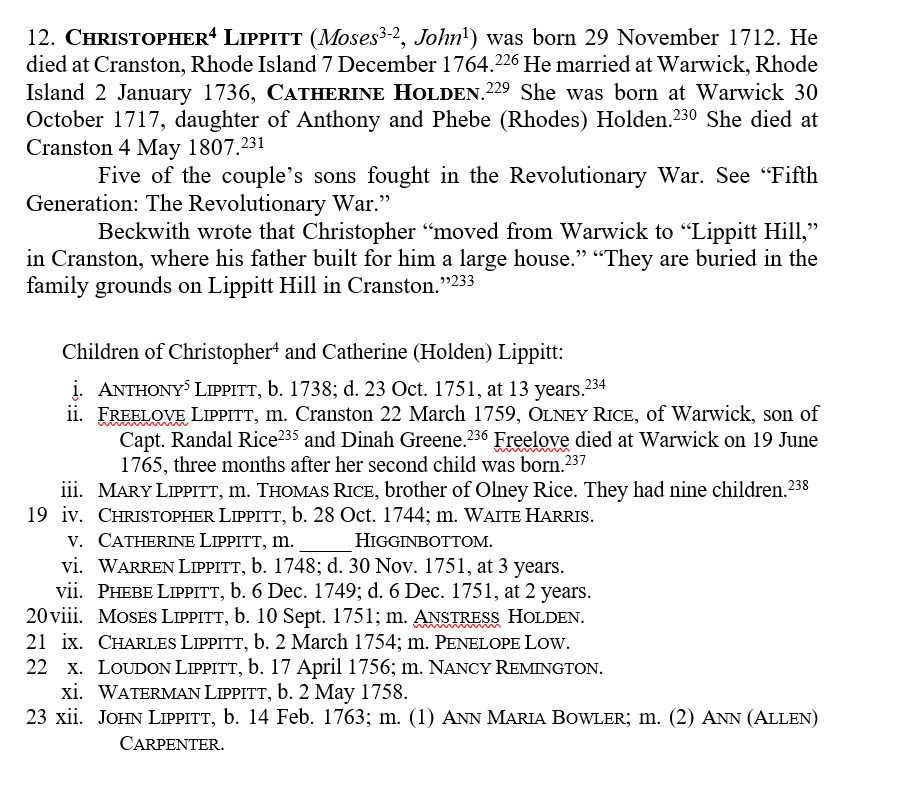 As this genealogy followed the Lippitt surname for nine generations, my treatment of Catherine (Lippitt) Higginbotham would only be given under her parents in the fourth generation, with references to herself and her husband (whom I now can identify as Niles). Oh, well, one more thing to add that I only discovered by tracing a different family backwards, rather than the original family forwards. As I note in the above work, Catherine (Lippitt) Higginbotham’s matrilineal great-great-grandfather was Rhode Island founder Roger Williams (also my own ancestor), so I can claim a distant kinship to the Crane family whose former beach we’ve enjoyed throughout this summer.[2]

[2] See Descendants of Roger Williams, Book One, which traces the descendants Roger’s daughter Mercy Williams, wife of Resolved Waterman and Samuel Winsor. Phebe (Rhodes) Holden [in Lippitt genealogy image], was the daughter of John and Waite (Waterman) Rhodes, and granddaughter of Resolved and Mercy (Williams) Waterman. I descend from Mercy (Williams) and her second husband Samuel Winsor, making myself and the “Crane children,” eighth cousins once removed (of the half blood).

6 thoughts on “Summer spots: Part One”