Fifteen years after the second effort to build a monument in Provincetown had been abandoned and three years after Plymouth dedicated its National Monument to the Forefathers, there was another initiative to commemorate the First Landing of the Pilgrims at Provincetown. On 29 February 1892, a group of civic-minded citizens – James H. Hopkins, James Gifford, Artemas P. Hannum, Moses N. Gifford, Howard F. Hopkins, Joseph H. Dyer, and their associates and successors – were made a corporation, the Cape Cod Pilgrim Memorial Association (CCPMA), by an act of the Massachusetts Legislature. Later that year an appeal for funds was circulated to the general public and a request for funding was made to the Massachusetts Legislature. Not only did CCPMA members see their mission as building an appropriate monument to commemorate the arrival of the Mayflower at Provincetown, they were determined, too, to recognize other significant events in Provincetown’s Pilgrim history, including the Signing of the Mayflower Compact, the birth of Peregrine White, and the death of Dorothy May Bradford. END_OF_DOCUMENT_TOKEN_TO_BE_REPLACED

This is a tale of how curiosity, knowledge of local Italian sources and conditions, and focused research strategies uncovered an error in church records and solved a genealogical mystery. Last year I finally discovered that my immigrant great-great-grandfather Antonio Pugni (1840-1913) was from the village of Coli in Piacenza, Italy. Fortunately, Coli parish church records of baptisms, marriages, and deaths date to 1718, and in some instances to the 1690s, and can be accessed directly on FamilySearch.org. Civil registration records of births, marriages, and deaths begin in 1806 and are also online at FamilySearch, but images can be viewed only at any of the 5,000+ Family History Centers worldwide. END_OF_DOCUMENT_TOKEN_TO_BE_REPLACED

The news of the recent death of Lyon Gardiner Tyler, Jr., aged 95, grandson of 10th U.S. President John Tyler (1790-1862), leaves just his younger brother, Harrison Ruffin Tyler, aged 91, as the last grandchild of a president who was born during the administration of George Washington, and whose term in office began twenty years before the Civil War. I’ve always been fascinated when hearing that John Tyler had two living grandsons and would occasionally confirm their longevity. The reason President Tyler has such extended generations is due to a second marriage at fifty-four years old, in the last year of his presidency, which resulted in seven children born between 1846 and 1860, the youngest when Tyler was seventy years old. END_OF_DOCUMENT_TOKEN_TO_BE_REPLACED

As I work on a genealogy of the Livingston family in Scotland and America, I am roughing out appendices covering the family of the 4th Lord Livingston, the Livingstons of Dunipace and Kilsyth, and the Fleming and Hamilton families in seventeenth-century Edinburgh: this is the family circle around the Rev. John Livingston (1603-1672), whose son and grandson emigrated to New York later in the century. All of this is meant to answer the questions, To what extent did the Livingstons feel connected to their Scottish kin, and are there clues to be found in some of these connections? END_OF_DOCUMENT_TOKEN_TO_BE_REPLACED

With its roots in the Old Colony Club, founded in 1769, the Pilgrim Society was formally organized in Plymouth in 1820, the bicentennial of the Landing of the Pilgrims. Its mission was to perpetuate the memory of the Mayflower Pilgrims, specifically with the goal of building appropriate monuments, the first of which was Pilgrim Hall, whose cornerstone was laid in September 1824.[1] END_OF_DOCUMENT_TOKEN_TO_BE_REPLACED

Finishing up this series on places my family enjoyed during our socially distant summer, I move now from the North Shore to the South Shore, to “World’s End” in Hingham. This Trustees property was designed by the well-known landscape architect Frederick Law Olmsted in 1890 at the request of owner John Reed Brewer, with the intention of creating a 163 home residential subdivision. While the drives were cut, the development never came to fruition, and the land, consisting of four coastal drumlins extending into Hingham Harbor (with views of the Boston skyline), has been preserved as a setting for recreation since 1967, after the land was donated by John’s grandson, the poet [John] Wilmon Brewer (1895-1998). END_OF_DOCUMENT_TOKEN_TO_BE_REPLACED

My surname comes down to me from a ten-generation line of Grovers, all of whom have lived in America. The first in this line is Edmund Grover (1600-1682), who emigrated from England to the Massachusetts Bay Colony some time between 1628 and 1633.[i] His ancestry in England is not known with certainty, so ten generations is all that can be claimed. But ten generations are enough to say that I am thoroughly a Grover. Biologically speaking however, Edmund’s bloodline has been diluted at each generation by spouses who have contributed equally to who I am. I carry Edmund’s surname, but only a vanishingly small percentage of his blood. END_OF_DOCUMENT_TOKEN_TO_BE_REPLACED

My prior post on my own matrilineal ancestry and merged names continues with my father’s matrilineal line. My paternal grandmother’s parents were both natives of Philadelphia, and she recorded many of her ancestors and their siblings in a family Bible I used early on in my genealogical research. She identified her matrilineal great-grandmother as Mary E. Young (died 1900), wife of John Lentz Peltz (1819-1876). The Bible identifies her father as Peter Young, but does not list a mother, although it does list Mary’s siblings as Peter, Sarah, Eliza, Philip, Margaret, and David. Mary and her husband John were born, married, and died in Philadelphia, and several generations of her husband’s family are treated in a 1948 Peltz genealogy; a 1950 supplement even included my father’s older sister. END_OF_DOCUMENT_TOKEN_TO_BE_REPLACED

Proof that fears and concerns still prevail six months after the country was plunged into lockdown, isolation and quarantine could be found in the empty streets of Plymouth on the day that eager Mayflower descendants and philatelists should have been lining up for the first day issue of the long-awaited Mayflower in Plymouth Harbor stamp. All the empty parking spaces along the main thoroughfares were the first clue that the event, like so many others, had been scratched from calendars. But not mine. END_OF_DOCUMENT_TOKEN_TO_BE_REPLACED 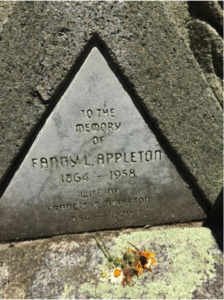 To continue my look at outdoor spots my family enjoyed this socially distant summer, I now will talk about Appleton Farms in Ipswich and Hamilton, not too far from the Crane Estate. The Trustees website describes Appleton farm as the “gift of Colonel Francis R. Appleton, Jr. and his wife Joan, [and] one of the oldest continuously operating farms in the country, established in 1638 and maintained by nine generations of the Appleton family.”

During our two visits to Appleton Farm this summer, my family and I found three monuments (there are more) to members of the Appleton family, the first to the above Joan Egleston Appleton (1912-2006), and then monuments to Col. Appleton’s parents – Francis R. Appleton (1854-1929) and Fanny L. Appleton (1864-1958).[1] END_OF_DOCUMENT_TOKEN_TO_BE_REPLACED