My great-grandfather John W. Rhodes lived in Wareham, Massachusetts for most of his life. Though I remember him well, I knew nothing of his extended family. His 1966 obituary named Eva (Rhodes) Clancy of Westerly, Rhode Island, as a surviving sister. Sixteen years later, I hoped some members of the Rhodes family still lived there as I prepared for my first of many trips to Westerly. END_OF_DOCUMENT_TOKEN_TO_BE_REPLACED 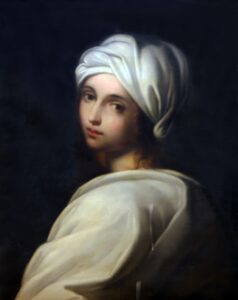 I did some research on the Internet and Wikipedia about the Portrait of Beatrice Cenci after learning a bit about this copy of the painting from Curt DiCamillo, Curator of Special Collections at American Ancestors and New England Historic Genealogy Society. END_OF_DOCUMENT_TOKEN_TO_BE_REPLACED

As a genealogist, when I hear the word “tree” I typically think of family trees, not the outdoor variety used for shade on a sunny day. However, I came across an interesting newspaper article about a gentleman named James Raymond Simmons who gave a lecture on trees at the New England Historic Genealogical Society one hundred years ago. Simmons, who served as secretary-forester of the New York State Forestry Association and assistant state forester of Massachusetts, described trees as “the oldest living witness of our past history.”[1] He compiled a list of Massachusetts trees and their connection to people and historic events, which he included in his book The Historic Trees of Massachusetts.[2] Although a few of his examples have tenuous connections, I appreciate the message Simmons attempted to convey to his audience. END_OF_DOCUMENT_TOKEN_TO_BE_REPLACED

The executions of the Earl of Douglas,[1] his brother David Douglas, and Sir Malcolm Fleming[2] for treason in November 1440 mark an important moment in the early reign of King James II.[3] A boy of ten under a regency – the Douglases’ father,[4] who died in 1439, was James’s first regent; the king’s guardian in 1440 was Sir Alexander Livingston of Callendar – James II was already sadly familiar with unrest among the Scottish nobility, and the execution of his Douglas second cousins and their advisor Fleming of Cumbernauld was by no means the last such event in his short reign. The fall of the Douglases, following the events leading up to Livingston becoming the de facto regent, set the stage for the Livingston family’s own spectacular downfall in 1449-50, although Sir Alexander and his elder son James would survive the worst of it. END_OF_DOCUMENT_TOKEN_TO_BE_REPLACED

Recently a colleague was interviewed for a UK radio show concerning his Mayflower ancestor Governor William Bradford and noticed an entry on a Wikipedia page regarding William Bradford’s descendants. I have long been aware of Hugh Hefner’s Mayflower line, as this has been mentioned in most of his biographies, and he even named his youngest child Cooper Bradford Hefner. Gary Boyd Roberts included the line (see below) in his recent publication, The Mayflower 500. Looking at the line over the years, I have never seen anything wrong with it. END_OF_DOCUMENT_TOKEN_TO_BE_REPLACED

And here is the humble brag: because my grandmother’s ancestors stayed put, and let’s face it, married their extended relatives (folding the family tree in on itself numerous times), I can prove descent from many Mayflower passengers, many times over. END_OF_DOCUMENT_TOKEN_TO_BE_REPLACED

As I work at reconstructing the environment in which the Livingstons of the sixteenth and seventeenth centuries lived, I have been struck by the frequency with which I have encountered members of the Menteith family. (It is fair to say that there are a number of such families in this project, interrelated in various ways, but the Menteiths keep turning up!) To arrive at the early modern Livingston family, I have gone back on various lines (including the ancestry of Livingston spouses), so the resulting family trees cover individuals who were not named Livingston – or aware of these particular connections. END_OF_DOCUMENT_TOKEN_TO_BE_REPLACED

Now that a few of our shelter-in-place orders have been lifted, my wife Nancy and I have started to get back to the more ‘normal’ side of life. I have to admit, it’s been pretty nice not having to treat toilet paper like some new form of currency, and truly heartwarming to only Zoom with the grandkids for fun. Indeed, the pandemic life has reminded me of what’s most precious in life, i.e., family. Interestingly enough though, it’s also played an important part in helping me to find out just who I am – at least in ancestral terms. Yes, ye olde pandemic life has also taught me a thing or two outside of ‘the norm.’ And along with its implied “six degrees of separation,”[1] this period has reminded me about some ancestral ties I scarcely knew I had. END_OF_DOCUMENT_TOKEN_TO_BE_REPLACED

I had previously recorded data about his parents and the names and dates for his sister Malena and for two brothers, both named Lars. I knew that the first “Lars” died as a baby and that it was fairly common practice in those days to name a later child after one which had been lost. In fairness, I had never paid much attention to the death of the older Lars, who was baptized 24 March 1771 and buried later that year (on 10 November). END_OF_DOCUMENT_TOKEN_TO_BE_REPLACED

For much of the eighteenth century, the political landscape of Rhode Island was shaped by a single family. Between 1732 and 1775, four descendants of Edward Wanton served as the governor of the Colony of Rhode Island and another would act as deputy governor. The run of Wantons serving as the chief executive of the colony began when two of Edward’s sons, William and John, served consecutive tenures between 1732 and 1740; it came to an end when William’s son, Joseph, was removed from office at the start of the Revolutionary War after he opposed the formation of an army out of loyalty to the crown. While there have been many fathers, sons, and brothers who have held the same office at different times throughout American history, the story of the Wanton family is interesting for the number of individuals connected to the family who held prominent positions.

Five years after the death of his uncle, Governor John Wanton (1672-1740), Gideon Wanton became the next member of his illustrious family to serve in the same position. END_OF_DOCUMENT_TOKEN_TO_BE_REPLACED