Since 1993, I have read countless family records within the pages of old family Bibles for colleagues and patrons at NEHGS. I have been fortunate to share in many moments of discovery. The moment when patrons discover we have their family Bible is priceless.

However, until recently I had never experienced this same moment of discovery for myself. Of course, I always hoped that one day I would walk into an archive, historical society, or a relative’s home and miraculously discover an old family Bible relating to my branch of the family. Most of the time this was simply a lovely ending to a genealogical day dream.

A few years ago, I was reviewing copies of letters between my great-aunt Mary Olive (Lea) Rogers (1899–1995) and her cousin Florence Newton written during the 1960s. In one of those letters her cousin asked: “Do you still have that large family bible that sat on the little table in Toronto your dad owned?” I paused and considered that a family Bible for my great-grandfather John George Lea (1876–1953) might actually exist. Then I realized this is the same man who received a trunk of family papers and photos from his late brother in England, decided they smelt funny, and tossed in a match! And, so, up in smoke went any hope that my family history had survived. I tried not to think of what might have been in the trunk, let alone what became of this old Bible.

Then I realized this is the same man who received a trunk of family papers and photos from his late brother in England, decided they smelt funny, and tossed in a match!

While in Salt Lake City a couple of years ago I met with my second cousin Wendy (Rogers) Butterfield for dinner. In passing I mentioned this old family Bible and inquired whether she remembered her grandmother Mary Olive having it. Wendy did not recall it; however, she did make an inquiry of her aunt – the last living cousin of my mother. Cousin Doreen lived in Alberta, Canada. (This is the Canadian province my great-Aunt Mary Olive had lived in since the early 1920s, when the family moved from Toronto.) Was the Bible in Alberta? Did my great-aunt have it? I don’t remember her mentioning it in all the times we chatted about family history before she died. Then one evening this past summer a Facebook messenger opened – it was Cousin Wendy. She said that she had located the bible!

The Bible was now in the possession of my great-aunt Mary Olive’s granddaughter Marilea McCaw in Alberta. Quickly I got on the phone and reached out to her because there was one other part of the news – she wanted to find a new home for the Bible. After a couple of phone calls, she shipped the Bible to NEHGS in Boston. The day it arrived was like Genealogical Christmas for me. My colleague Melanie McComb at NEHGS videoed the moment for me with my iPhone when I opened this family treasure. Holding back tears I carefully unwrapped this bible that had had a long voyage since its purchase in 1874.

Written on the flyleaf was “Martha Percival June 6, 1874.” Martha was the younger sister of my great-great-great-grandfather George Wilkinson (1814–1877) of Wistaston, Cheshire. Martha Wilkinson married Peter Percival at Wistaston 17 December 1867; they had no children. On 10 May 1900, this Bible was presented to my great-grandfather John George Lea by his great-aunt Martha as revealed from the inscription inside the bible. 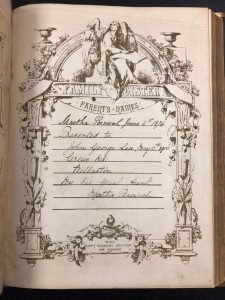 In 1910, John and his family left for Toronto aboard the Empress of Britain. The Bible made the voyage across the Atlantic in a steamer trunk. From 1910 to 1953, the Bible remained in Toronto. It is unclear whether the Bible was sent to my great-aunt Mary Olive in Alberta or remained with my other great-aunt Phyllis (Lea) Hawkins until her death in 1984. The Bible then passed to Mary Olive’s daughter Marjorie, then to Marjorie’s niece Marilea. And the final leg of the voyage thus far has seen the Bible come to America, where it resides with my family.

What is in this family Bible for genealogical information, you might ask? Not very much that I didn’t already know. My great-grandfather or great-grandmother Harriet Ann (Wilkinson) Lea (1877–1920) inscribed the birthdates of their children Mary Olive (b. 1899), John Samuel (my grandfather, b. 1901), and Phyllis (b. 1916). Then the penmanship changes to a familiar script I remembered from holiday cards and letters from long ago – my great-aunt Mary Olive inscribed the children and grandchildren from her marriage to Clarence Rogers. There is room for more to be written – more generations to be remembered. For a genealogist the chance to hold something that belonged to an ancestor is very powerful – the chance to be the new caretaker for the next chapter of its history is an honor.

14 thoughts on “The saga of a family Bible”